‘Is this cute for a party that resulted in a bang?’ – Hazare’s letter to Kejriwal and background 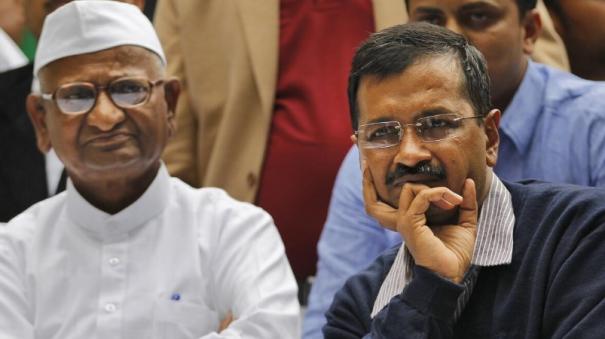 New Delhi:Your words and actions have nothing to do…’ – this is how senior social activist Anna Hazare has criticized Delhi Chief Minister Arvind Kejriwal. Anna Hazare has written a letter to Kejriwal when there is no dearth of excitement in Delhi politics like CBI raid, investigations, MLA meeting, trust vote.

Anna Hazare letter details: “I am writing to you for the first time since you became Chief. The reason for this is the recent news about Delhi’s liquor policy. You have made some great suggestions about liquor policy in your book Swaraj. I wrote the foreword for that book. You had said in it that liquor shops should not be opened in that area without the consent of the people. But, after becoming chief, you seem to have forgotten all that!

I did not expect such a policy from the Delhi government. After you became CM you completely forgot about Lokpal, Lok Ayukta. You have not tried to bring Lok Ayukta even once in the assembly. Now your government has come up with a policy that affects people’s lives and women. This alone is enough to show that your words and actions are different.

Protests against the liquor policy in Maharashtra empowered rural women to voice their opposition to the sale of liquor. But, today the Delhi government is trying to implement the liquor policy and is caught in the corruption due to it. Liquor shops have come up in every nook and cranny of Delhi. Is it cute for an epic party? You are intoxicated with power,” Anna Hazare said in the letter.

Anna Hazare and AAP: In 2011, a protest was held on behalf of the movement called India Against Corruption. This protest led by Anna Hazare turned into a huge protest and made the world look back. Anna Hazare went on a continuous hunger strike demanding the passage of the Lokpal Bill to eradicate corruption. It was on that stage that Arvind Kejriwal was introduced to the people. Anna Hazare’s cap is identified. Kejriwal won the Delhi elections by writing Aam Aadmi on the hat and making the lamp the symbol of the party. In 2012, Aam Aadmi came to power in Delhi. Now the Aam Aadmi Party is ruling Delhi for the 2nd time.

Anna Hazare, who refused to engage in radical politics, extended her support to the party and Kejriwal from outside. But after the establishment of the Aam Aadmi Party government, it was repeatedly criticized. Thus, Kejriwal avoided even talking about Anna Hazare. Anna Hazare has written a letter to Arvind Kejriwal after 11 years.

Controversial Policy: Delhi, the capital, and Chief Minister Kejriwal and his colleagues have been the talk of the media lately. The reason is Delhi’s liquor policy. The AAP-led government in Delhi introduced the new liquor policy on November 16 last year. Accordingly, liquor zones were created. Private individuals were given license to carry out retail sales in 849 outlets across Delhi. Door-to-door delivery of liquor was also allowed. This new liquor policy, which was implemented on an experimental basis, was completed on July 31.

Following this, CBI officials conducted raids on 19th at 31 places, including Deputy Chief Minister Manish Sisodia’s house. Important documents have been seized. CBI has registered a case against 15 people including Sisodia. In this situation, Arvind Kejriwal is saying that the BJP is secretly trying to overthrow the Aam Aadmi Party government and take over the government in Delhi.

New York Times News and Raid: The Delhi political controversy began a day after the New York Times of America published a full-length article on the front page of Delhi’s educational and medical developments and the man behind them, Manish Sisodia. Therefore, BJP cannot tolerate the growth of Aam Aadmi Party in Delhi and launches the CBI system. Manish Sisodia said that Aam Aadmi Party is a direct competitor to BJP in 2024 elections. The controversy that started that day has taken various forms and continues to grow.