Israel arrests Palestinian for injuring soldier after being hit by car 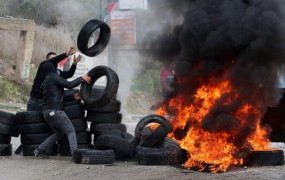 Digital Desk, Jerusalem. A Palestinian has been arrested in the Israeli-occupied West Bank after a car-ramming attack in which a soldier was injured. The Israeli army gave this information. The incident took place on Tuesday outside the Israeli settlement of Halamish.

A military spokesman said in a statement that the driver accelerated his car toward several soldiers who were guarding the route, when the car hit a soldier who was taken to hospital by an Israel Air Force helicopter. gone.

Israel’s Magan David Adom Emergency Health Service said in a statement that the 19-year-old soldier had minor injuries to his legs, Xinhua news agency reported. The suspect was apprehended and sent to security forces for further interrogation, the statement said. The incident happened in the West Bank. Israel seized the West Bank in the 1967 war and has controlled it ever since, despite international condemnation.