Israeli Defense Minister: If necessary, we will enter Beirut, Sidon and Tyre 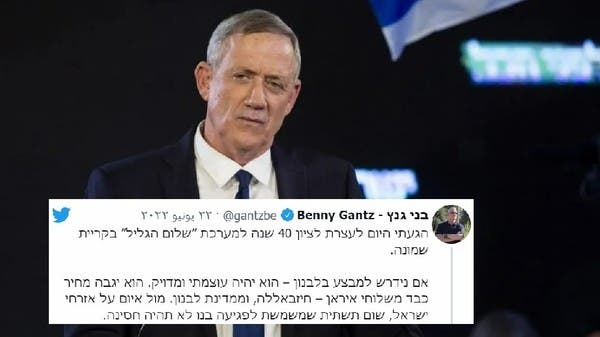 The Israeli Defense Minister, Benny Gantz, threatened to re-invade Lebanon and incur a “heavy price” for Hezbollah in any possible military operation, according to what he said in a series of tweets he wrote yesterday evening, Wednesday, in one of which he said: “We are ready for battle, and if necessary, We will go again to Beirut, Sidon and Tyre.”

Gantz had written in his first tweets: “Today I arrived at a gathering to commemorate the fortieth anniversary of Operation “Peace of the Galilee” in Kiryat Shmona,” in reference to the “Lebanon War” that erupted on June 6, 1982, during which Israel arrived in Beirut, according to what we find in a video presented by “Al-Arabiya”. .net” below, and besieged it by land and sea for 88 days, then ended with the Palestinian resistance, which included 12,000, withdrawing from Beirut, in exchange for Israel to retreat from the region.

In another tweet, the minister wrote, “If we are asked to carry out a military operation in Lebanon, it will be strong and accurate, and it will impose a heavy price on Hezbollah and the State of Lebanon (..) and no infrastructure will be used to harm us, immune to any threat to my citizens.” Israel,” he said.

However, he reiterated that “our conflict is not with the citizens of Lebanon, to whom we have extended our hands several times, including last year…there are ways to walk, the other side must have the courage to start” and reiterated that Israel “does not want war. We are ready to go very far. On the path of peace and settlement regarding the maritime borders between us and Lebanon, which we must conclude quickly and fairly.” He considered that reaching an agreement on the demarcation of the maritime borders “would be, for the moribund Lebanese economy, a breath of fresh air to breathe,” according to his opinion.

Likewise, Israeli President Isaac Herzog said on June 14 that: “There is no unresolvable conflict between Lebanon and Israel, nor between the Lebanese and Israeli peoples… Our struggle is against the Iranian influence imposed on Lebanon and against the Iranian regime that continues to spread hatred, terror and pain.” suffering, by destroying the Lebanese state and by seeking to destabilize the entire Middle East.”