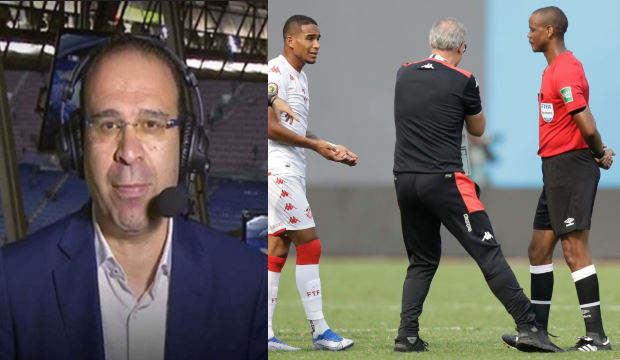 Tunisian commentator Issam Chaouali commented on the unprecedented “arbitration scandal” that took place in the Tunisia-Mali match yesterday, with a wide interaction on social media. This match was part of the Group F competition of the African Nations Cup, which is currently hosted by Cameroon, and entered the history of strange matches, after the Zambian referee Sikazwe blew the final whistle twice, the first in the 85th minute, as he did not pay attention to the time, before correcting his mistake and asking to continue playing, and the second After he officially ended the match a minute before the end of its original time.

Shawali moved from the irony of the first referee’s decision, to the great anger after the second and final decision, and he kept repeating the word scandal, calling for an end to what is happening in the game on the African continent, and with fairness to the Tunisian team. Tunisia was behind with a goal of zero against Mali, when the referee announced the end of the match before the end of its original time.

After prolonged consultations between the officials of the Confederation of African Football “CAF”, the arbitration committee and representatives of the two teams, the fourth referee decided to resume the match for three minutes. Then the match was ended with the withdrawal of the “Carthage Eagles” and the victory of Mali.

Many people spoke about Shawali’s comment with a lot of ridicule from the arbitration situation in the African Cup, and many of the tweeters supported him in his demand to hold those responsible for the deterioration of the football situation in the brown continent accountable. While others saw that Shawali ignored the referee’s own involvement in an arbitration scandal linked to Tunisian club Esperance during the Agosto match in Angola in the CAF Champions League in 2018.

Shawali’s speech before the incident of the Zambian referee, when he spoke that the match will extend for seven minutes of added time, received a lot of ridicule from the followers, especially after Shawali received a great shock by ending the match before its original time, and twice.