It is unfortunate to politicize the good plans of the central government: Prime Minister Modi 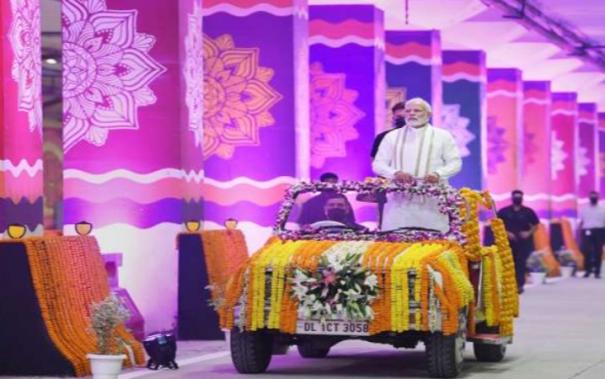 New Delhi: Prime Minister Narendra Modi has said it is unfortunate that the good plans of the central government are being politicized.

Protests are being held in various states against the newly introduced Agni Path project in the three forces. The BJP has accused political parties of being behind the protests.

In this context, Prime Minister Narendra Modi yesterday inaugurated the Rs 920 crore Pragati Maidan Integrated Transport Route in Delhi on behalf of the Union Government. The Prime Minister then indirectly pointed out that the opposition was politicizing the struggle against the Agni Path project.

Without directly mentioning the struggle, he said, “The federal government is coming up with various good plans in good faith. But those plans are being politicized. This is very unfortunate, “said Tariq al-Hashimi, the party’s secretary general.

Prime Minister Modi further spoke at the function. The construction of Pragati Maidan integrated transport route has been completed amidst various challenges including traffic congestion and corona Pandemic. This is a gift from the Central Government to the people of Delhi.

Construction of the new parliament building is also in full swing. Various projects are being implemented to modernize Delhi. Delhi’s infrastructure will be talked about internationally in the coming years.

Basic infrastructure has been upgraded in Delhi and NCR areas over the last 8 years. The 193 km long metro train is 400 km long. Expanded to. Delhi’s East and West Ring Expressways and the Delhi-Meerut Expressway have eased traffic congestion in Delhi.

The infrastructure of the country will be strengthened through the Prime Minister’s energy program. Over the next 25 years metropolitan, 2nd and 3rd tier cities will be upgraded. At the same time we must protect the environment of cities. To this end, the use of CNG vehicles and electric vehicles in cities is encouraged. Thus spoke the Prime Minister.

1.6 km Tunnel: The Pragati Maidan integrated transport route project will cover a distance of 1.6 km from the Delhi Pragati Power Station to the National Sports Complex. A 6-way tunnel is set up for the distance. This has solved the traffic congestion problem of the people of East Delhi, Ghaziabad and Noida. The 30-minute journey through the area will be reduced to 5 minutes by the new tunnel. The people of Delhi are happy that the fuel is left over.