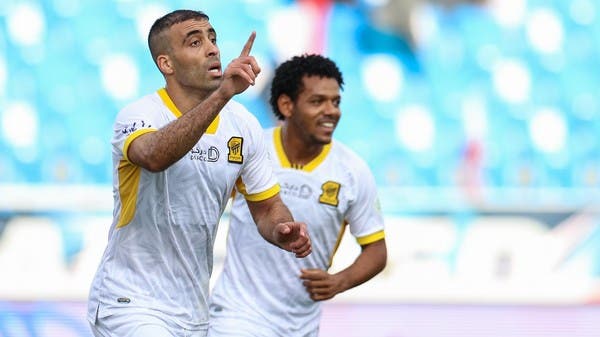 Ittihad Jeddah consolidated its lead after winning 2-1 against its host Al-Raed, in the confrontation hosted by King Abdullah City Stadium in Al-Qassim, in the 17th stage of the Mohammed bin Salman Professional Cup League, on Friday.

Al-Ittihad continued its brilliance under the leadership of its Romanian coach Cosmin Contra, after achieving its seventh consecutive victory to move away to the top of the league.

Moroccan Abdel Razzaq Hamdallah succeeded in making his mark quickly with his new team, when he scored his first goal with Al Ittihad.

The match began with an attack by Al-Raed that was to produce the first goal after 19 seconds, when his Moroccan striker Karim El-Barkaoui was the only player in the federal goal and hit the ball, but it found the Brazilian goalkeeper Grohe, who pushed it away with difficulty.

And in the 21st minute, Moroccan Abdel Razzaq Hamdallah scored the first goal when he rose to the cross of his Brazilian colleague Bruno Henrique and headed the ball into the net of Al Raed goalkeeper.

Al-Raed responded quickly when his Moroccan striker Karim El-Barkaoui missed a goal after receiving a pass from his compatriot Mohamed Fawzir to face the goal and hit the ball, but it found goalkeeper Grohe, who narrowly missed it.

In the second half, Al Ittihad took control and waited until the 85th minute, when Brazilian striker Romarinho scored the second goal through a penalty kick.

And at the 90+2 minute, Moroccan Mohamed Faouzir, player of Al-Raed, scored his team’s only goal after hitting a powerful ball from outside the penalty area that landed in the net of goalkeeper Grohe.

With this result, Al-Ittihad’s balance rose to 38 points to consolidate its lead, and Al-Raed stayed on its previous score of 24 points to remain in sixth place.