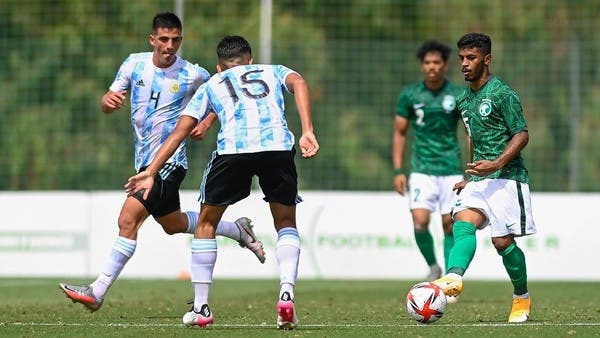 
The Saudi team begins its campaign in the Tokyo Olympics when it faces its counterpart Ivory Coast in the match hosted by Nissan Stadium on Thursday, in the first stage of the fourth group competition, which will witness a strong confrontation between the Brazilian team against its German counterpart.

The Saudi team signed a strong group in its third Olympic participation, as the group includes the teams of Germany, Brazil and Ivory Coast.

The Saudi team completed its preparations for the Olympic participation, led by its national coach, Saad Al-Shehri, where it played more than one friendly match over 3 periods.

The Saudi team started its friendly matches last March, where it faced Liberia in two matches, winning the first 3-2 and drawing 0-0 in the second.

In June, he played two friendly matches, where he drew 1-1 against Mexico and lost to Argentina 2-0.

During the month, he played 4 friendly matches at the end of his preparations, where he faced Uganda in two matches, where he drew 0-0 in the first and won the second 2-0, and played against Romania in two matches that all ended in a draw.

The Saudi national team coach was chosen by the trio, Salman Al-Faraj, Yasser Al-Shahrani and Salem Al-Dosari, who will participate over the specified age.

The confrontation will not be easy for the green, as the Ivory Coast team includes players active in European leagues, most notably the trio, Eric Bailly, Manchester United defender, Frank Kessie, AC Milan player, and Max Gradel, the Turkish Sivasspor player.

There are a number of distinguished young players in the ranks of the Ivory Coast, most notably Imad Diallo, player of Manchester United, defender, Fred Singo of Turin, and Christian Kouaki of Fiorentina, Italy.

Center Good news! Rs 10 thousand for all of them?

Warning to SBI Customers .. If these numbers and photos are on your phone, delete them immediately .. or ..

BJP’s strategy in Kerala to get minority votes

Saudi Education announces the date of the primary stage test

Wilfand appreciated the possibility of slowing down global warming