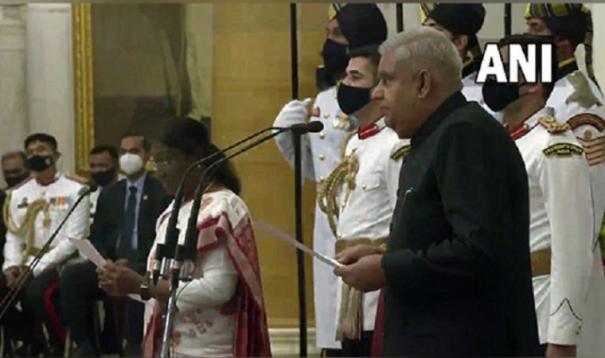 Jagadeep Dhankar, who contested on behalf of the BJP alliance, was sworn in as the 14th Vice President of the country. He was administered the oath of office by President Drarubathi Murmu.

Vice President Venkaiah Naidu’s tenure ended yesterday (August 10). In view of this, the election to select the next Vice President was held on the 6th.

In this, Jagadeep Dhankar, who was the Governor of West Bengal, was nominated as the Vice-Presidential candidate on behalf of the BJP-led National Democratic Alliance. Similarly, former Union minister and senior Congress leader Margaret Alva was fielded as the general candidate of the opposition parties.

After the vote registration was completed at 5 pm that day, the ballot box was sealed. Later, counting of votes started at 6 pm. Out of a total of 780 voters, 725 had cast their votes. That is, a total of 92.94 percent votes were registered.

Out of the votes cast, 15 votes were declared invalid. Jagadeep Dhankar secured 528 votes. Opposition candidate Margaret Alva secured 182 votes. Following this, Jagadeep Thankar was announced as the 14th Vice President of the country.

Who is Jagadeep Dhankar? – He was born in a farming family in Githana village, Rajasthan. He is a lawyer and has been in the Supreme Court for some time. He has also served as the President of the Rajasthan High Court Bar Council. He started his political career with the BJP and was elected to the Lok Sabha in 1989.

In 2021, he was appointed as the Governor of West Bengal by the Central Government. He had a conflict with the government headed by Mamata Banerjee.

Meanwhile, the 14th Vice President of the Republic has been nominated by the BJP and won.