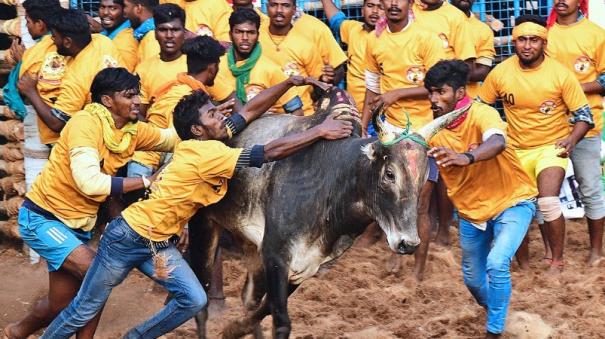 New Delhi: “Jallikattu is one of the cultural symbols of Tamils. How can we interfere in matters related to the culture and tradition of the Tamils?” The central government has presented arguments in the Supreme Court in favor of Jallikattu.

The case filed by PETA and animal rights activists seeking a ban on Jallikattu entered the fifth day of hearing in the Supreme Court. Senior lawyer Rakesh Dwivedi, who appeared for the Tamil Nadu government, said, “India is a multicultural country. Every state has its own culture. Some people follow different dietary habits, some are non-vegetarian, some are vegetarian, some are vegan. Killing animals for food is allowed, but there are some restrictions. “The law doesn’t say you shouldn’t eat it. All the jallikattu regulations are very clear. There is no compromise on that,” he replied.

Then the judges said, “Food is a very, very essential thing. How can it be compared to this?” At that time, the Tamil Nadu government lawyer said, “Eating habits are connected with culture. So the culture one follows creates a food habit. Culture is a fundamental right. So jallikattu is essential for us. Because Jallikattu has merged with the culture and tradition of Tamil Nadu,” he said. Further, documents were submitted on behalf of Tamil Nadu that Jallikattu is cultural.

The animal welfare organization objected to this and said, “We have not been given any documents. So the court should not consider this.” On behalf of the Tamil Nadu government, “It is the duty of the respective governments to protect the culture. This is clearly stated in Article 29 of the Constitution. Based on that, it is not only the duty of the Tamil Nadu government to protect the culture of Jallikattu, but also the responsibility. Jallikattu is beyond caste and religious differences. Jallikattu can be held on Pongal day. It is the best harvest. It is associated with the festival of giving thanks to nature and is a religious and religious event in Tamil Nadu.

Jallikattu is not just a recreational game. It is the cultural identity of Tamil Nadu. That is why every time many foreign tourists come to Tamil Nadu to see Jallikattu directly to know the culture. A large number of flint sculptures related to Jallikattu have been found in archeology. There are also ancient cave paintings. Full details of Jallikattu are given in Tamil literatures like Tholkappiyam, Kalidiyam etc.

Various university studies have proved that Jallikattu is the cultural identity of the state of Tamilnadu. Renowned historian Romila Thapar has clearly defined the cultural interactions of an ethnic group in her book. All of them apply to jallikattu,” claimed the Tamil Nadu government citing the data.

Then judges, when will the jallikattu competition take place? Where will the competition be held? How many tournaments are held on an average per year? He questioned.

Meanwhile, bulls have been involved in Jallikattu for 5000 years. But suddenly bulls are not animals that run like horses, so how can it be accepted that letting them run in the field is harassment?” the Tamil Nadu government questioned and submitted photographic evidence related to Jallikattu in the Supreme Court.

Following this, Solicitor General Tushar Mehta, who appeared on behalf of the central government, said, “The president’s permission for Jallikattu is legal. We support the decision of the state governments. Because the permission for this competition is given only after a full investigation by the district collector. Violation of the law is punishable by three years in jail and a fine of 5 lakhs. How can you interfere in Tamil Nadu’s culture and tradition? Jallikattu is not like a race like Rekla. State governments have banned races like Rekla many times.

But because Jallikattu is a sport that is ingrained in Tamil culture, Tamil Nadu has never banned it. At the same time, various regulations have been tightened in the Jallikattu Act. Therefore, the central government has extended its full support in the jallikattu issue,” he said. The judges adjourned the hearing of the case till tomorrow (Dec. 7).