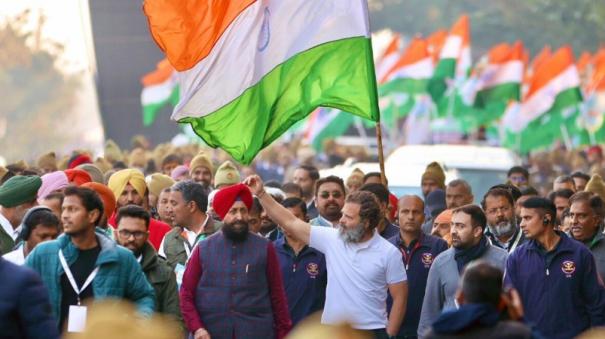 Jammu: Jammu Kashmir Congress Spokesperson Deepika Pushkarnath announced her resignation from the party. He said that he took this decision because former minister Lal Singh had given him permission to participate in the yatra.

Rahul Gandhi’s India Unity Yatra is set to enter Jammu and Kashmir this week. In this situation, Deepika Pushkarnath, spokesperson of the Congress party in Jammu and Kashmir, has announced that she is quitting the party.

In a post on his Twitter page, he said, “The Jammu and Kashmir Congress has accepted Se Lal Singh’s proposal to participate in the India Unity Yatra. Due to this, I have no other option but to leave the party. I am leaving the Congress party. Lal Singh, shameless against the perpetrators of the 2018 Kathua rape case.” protected

In order to protect them, Lal Singh carried out partition work in the entire Jammu and Kashmir region. The Indian Unity Yatra is aimed at anti-separation. Based on this opinion, I cannot participate in the Yatra along with the separatists,” he said.

Lal Singh, who was a two-time MP and three-time MLA, left the Congress party in 2014 and joined the BJP. He was also a minister in the PDP-BJP alliance government. This alliance broke up in June 2018.

Lal Singh left the BJP several months before the alliance broke up. Along with the Dogra Swabiman Sangathan party, he participated in a rally in January 2018 to protect Kathua rapists. “Lal Singh had said then that he had participated in the rally to defuse the prevailing situation.

Advocate Deepika Pushkar Nath took the parents of the Kathua rape victim to the Jammu High Court to witness the trial. Also, he directed them to appeal to the Supreme Court to transfer the case to Pathankot in Punjab.

Asked if his continued participation in the Lal Singh Yatra would create any impact, Patil said, “We are fully focused on our leader’s yatra. If Lal Singh believes that Rahul Gandhi is bridging the gaps between different castes and religions, then he can participate in the yatra. When the yatra ends at Lal Chowk on January 30, Rahul “Gandhi will hoist the tricolor there and that flag will always fly in our party office,” he said.

In view of Ch. Lal Singh’s proposal of joining @bharatjodo & @INCJammuKashmir allowing the same, I am left with no other option but to resign from @INCIndia
Lal Singh was responsible in sabotaging the Kathua rape case in 2018 by brazenly defending rapists.