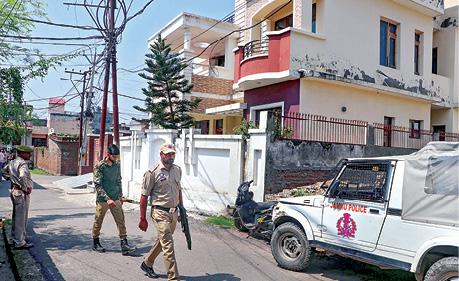 New Delhi: The Jammu and Kashmir Government Staff Selection Board conducted the written examination for the posts of Sub-Inspector (SI) in Jammu and Kashmir last March. The results were released on June 4. After complaints of irregularities, the Kashmir administration set up an inquiry committee to investigate the matter. The inquiry committee indicted 33 people for malpractice in the written examination.

Subsequently, the Kashmir administration requested the CBI to investigate the matter. As a result, the CBI announced on August 5 that it has registered a case against 33 accused in connection with this corruption.

In this case, the CBI conducted a second search yesterday at 33 places, including the offices and houses of Jammu and Kashmir Government Staff Examination Board Chairman Khalid Jehangir and Examination Controller Ashokumar.

Regarding this, CBI said: Officials of Jammu and Kashmir Civil Service Examination Board, a private company from Bangalore which prepared the question paper, the benefited candidates and some others were involved in the written examination malpractice. Candidates from Jammu, Rajouri and Chamma districts have been selected in an unusually large number. The Jammu and Kashmir Government Staff Examination Board has violated the rules by engaging a Bangalore-based private company in the preparation of the question paper. CBI said.