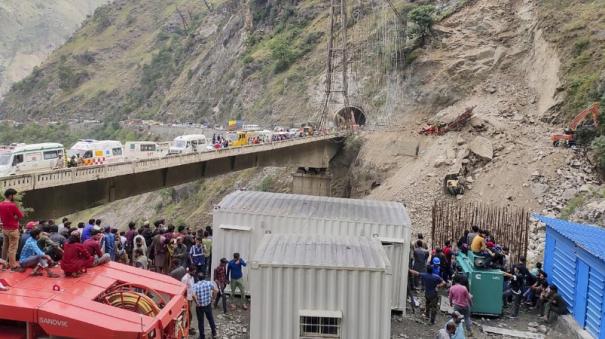 Srinagar: The bodies of 10 workers have been recovered after a 36-hour rescue operation in a tunnel accident in Jammu and Kashmir’s Ramban district.

A tunnel is being constructed at Koni Nalla on the Srinagar-Jammu highway in the Ramban district of Jammu and Kashmir. A section of the tunnel collapsed due to a landslide the night before yesterday (Thursday) while construction work was going on here. Construction workers were trapped in the rubble. The task of rescuing them was underway. Rescue operations were launched immediately after the accident but were delayed due to another landslide last night (Friday).

However, the bodies of about 10 workers have been recovered so far. The 10 dead included five from West Bengal, two from Nepal, one from Assam and two from Jammu and Kashmir.

Due to the large landslide, the tunnel was surrounded by rubble. At the same time, those trapped were said to be less likely to survive. More than a dozen workers were employed by a company called Charla. Three of them were rescued with injuries yesterday.

Meanwhile, relief of Rs. 16 lakh each has been announced for the families of the 10 deceased workers.

The cause of the accident is said to have been negligence on safety measures. Officials investigating the accident said workers did not follow proper precautionary guidelines before starting work on the tunnel. An FIR has been registered in the negligence section following this negligence.