Japan and the US will increase cooperation on Taiwan 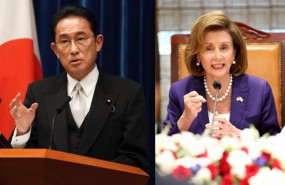 Digital Desk, Tokyo. Japanese Prime Minister Fumio Kishida and US House Speaker Nancy Pelosi met in Tokyo on Friday. The two leaders reiterated their commitment to work together to maintain peace in the region, especially as tensions continue to rise in the Taiwan Strait.

According to Japanese media reports, Kishida was quoted as saying that China’s behavior is a threat to peace and stability in the region and the international community.

Pelosi is the third highest ranking official in Washington. Arrived in Tokyo on Thursday evening during her visit to Asia. Earlier she had also visited Singapore, Malaysia, Taiwan and South Korea. His visit to Taiwan has raised tensions with China, which views the Democratic Island Republic as part of its territory.

The Chinese military is conducting major air and sea exercises this week in the waters around Taiwan, in retaliation for Pelosi’s visit. Japan has not taken an official stand on Pelosi’s visit to Taiwan and has instead advocated a peaceful settlement of the island’s issue through dialogue.