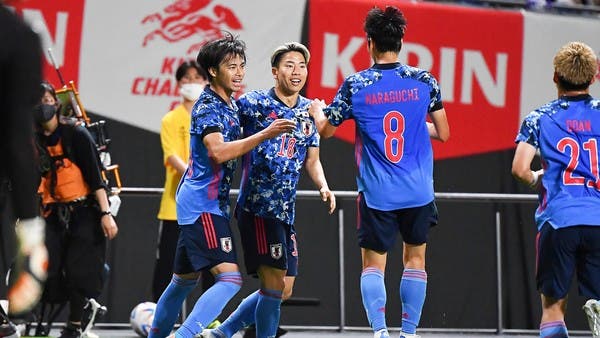 Two first-half goals from Takuma Asano and Daiichi Kamada led Japan to a comfortable 4-1 victory over Paraguay in a friendly in Sapporo on Thursday.

Asano scored the first goal in the 36th minute to give Japan the lead, before Kamada doubled the score six minutes later to give Hajime Moriyasu’s team a two-goal advantage.

Derlis Gonzalez reduced the difference for the visitors in the 59th minute, but Kaoru Mituma restored the difference to two goals less than a minute later, before substitute O Tanaka scored the fourth goal after the Paraguayan goalkeeper saved a penalty kick by Ritsu Duan.

Japan, which qualified for the seventh consecutive time for the World Cup, which begins in Qatar next November, dominated the match and the post responded to an attempt by Kamada in the 11th minute.

Nine minutes before the break, Genki Haraguchi sent a through pass to Asano, and the Bochum striker calmly put the ball into the net over the head of goalkeeper Santiago Rojas, who was well ahead of his line.

Six minutes later, midfielder Kamada cleverly put the ball over Rojas’ shoulder after a superb cross by Duane from the right.

Paraguay reduced the difference after an hour from the start when Gonzalez sent a shot from outside the penalty area.

But Japan regained their two-goal difference within a minute when Haraguchi sent a pass to the unmarked Mituma inside the penalty area to allow the winger to lift the ball over Rojas’ head.

Duane failed to score the fourth goal in the 70th minute through a penalty kick that Rojas saved, but substitute Tanaka fired a shot from 20 meters into the net five minutes before the end.

This is the first match between four friendly matches for Japan this June, as Brazil hosts on the sixth of the same month in Tokyo.

Japan will then meet Ghana on the 10th of June in the Kirin Cup before facing Chile or Tunisia on the 14th of June.

Japan will play the World Cup matches in Group E alongside Germany and Spain, and the winner will be facing Costa Rica and New Zealand in Doha on June 14.