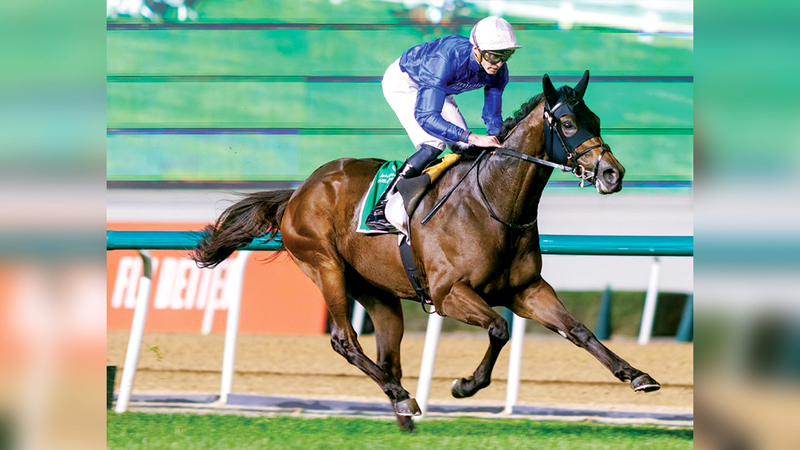 The horse, “The Gears”, with the slogan of Hamdan Sultan Al-Sabousi, and the supervision of coach Simon Crisford, was crowned champion of the first round of the “Al Maktoum Challenge” championship, which is dedicated to purebred hybrid horses “Group 2” for a distance of 1,600 sandy meters, which took place the day before yesterday, in the fifth and main round of The opening ceremony of the 2023 Dubai World Cup Carnival season, which was held at the Meydan International Racecourse in Dubai.

The ceremony included seven runs sponsored by Zabeel Feed, with a total of $980,000 in prizes. The official attendance at the ceremony was Sheikh Rashid bin Dalmouk Al Maktoum, Chairman of the Board of Directors of the Dubai Racing Club, Director General of the Emirates Horse Racing Authority, Eng. Mohammed Saeed Al Shehhi, and Director General of the Dubai Racing Club. Dubai Horse Racing Major General Dr. Muhammad Issa Al-Azab.

And the inaugural race of the carnival was recorded, where the “Godolphin” horses, under the supervision of coach Charlie Appleby, won the double victory, with the horse “Al-Suhail” snatching the title of the “Al-Fahidi Castle” race, which is reserved for horses of the second category, “Group 2”. Dollar, before his colleague in the stable, “Lazuli”, was crowned with the title of the final round, “Improvisation Dubai Dash”.

The jockey, James Doyle, succeeded in leading the six-year-old horse, “Al Gears”, to first place, six and a half lengths ahead of the second-place horse, “Discovery Island”.

The name of the jockey, James Doyle, returned to brightness again, after he led the horse “Al-Suhail” owned by “Godolphin” to break the record for a distance of 1400 meters over which the sixth round “Al-Fahidi Castle” took place, outperforming by a difference of four longer than his closest competitor, the “team” horse with the slogan “ Shadwell.”

The blue crest horses, led by jockey James Doyle, continued their stardom at the ceremony, with the horse “Lazuli” achieving a resounding victory in the seventh game, “The Improvisation Dubai Dash”.

In the rest of the results, the ceremony began with the horse “RB Rich Like Me” with the slogan “Victoria Racing and Fawzi Nas” snatching the title of the opening round of the “Al Maktoum Challenge” for purebred Arabian horses “Group 1”, which took place in the opening round for a distance of 1,600 sandy meters, with prizes amounting to 50,000. dollar.

The British horse “Enemi” shone with the Tracy Bell and Caroline Lions logo and won the “Dubai Racing Club Classic” race, before the horse “Switzerland” managed with the “RRR” racing logo. In the fourth round, the “Long Case” pony of the “Juara del Sur” stud, under the supervision of coach Julio Olascuaga, and led by jockey Joss Dasilva, snatched a precious victory in the preparatory race for the “Jumeirah Classic” championship, which was dedicated to three-year-old horses for a distance of 1400 grassy meters, with prizes amounting to 150,000. dollar.