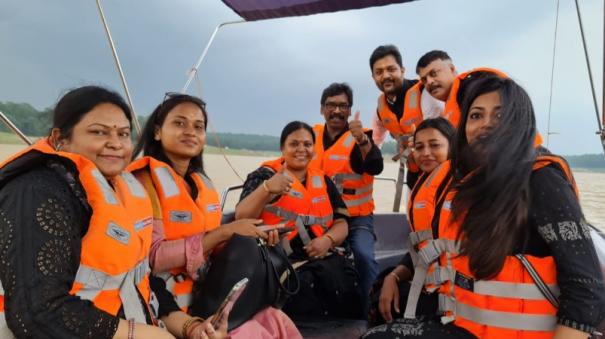 Ranchi: As suspense continues over the Election Commission of India’s order disqualifying the Jharkhand Chief Minister, Hemant Soran has been on a boat ride with ruling coalition MLAs.

As the Governor’s order regarding the disqualification was expected to be issued today, Chief Minister Hemant took 49 MLAs of his alliance party from his residence in 3 Volvo luxury buses at 3 pm. It was said that he might leave Jharkhand and move to other states, especially the Congress-ruled state of Chhattisgarh.

Instead, everyone went to the Latradu dam in Kunti district. At the dam, Mukti Morcha (JMM) and Congress MLAs, ministers, Chief Minister Hemant all enjoyed boating and taking photographs. A few hours later they left and returned to Chief Minister Hemant’s residence in Ranchi.

On behalf of the Jharkhand Mining Department, Chief Minister Hemant Soren was given mining allocation in June 2021. He was accused of abusing his position and getting the mine allocation contract for himself. In this regard, a case was filed in the Supreme Court on behalf of the BJP. Last February, senior BJP leader Raghuvar Das complained to the Chief Election Commission that Chief Minister Hemant Soran had acted against the Representation of the People Act, 1951.

The Chief Election Commission sent its decision to Jharkhand Governor Ramesh Bhais in a sealed envelope after the arguments of Hemant Soran and BJP were over. Chief Minister Hemant Soran’s MLA. There are reports that a recommendation has been made to disqualify the post. Governor Ramesh Bais returned to Ranchi yesterday from Delhi. After the disqualification notice was issued by the Governor in a government notification, Chief Minister Hemant Soran had to resign. However, he can be re-elected within 6 months through a by-election.