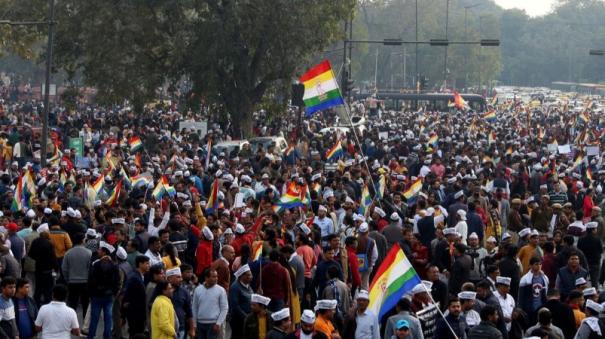 New Delhi: Mount Parasnath is situated at an altitude of 4,478 feet in Giridi district of Jharkhand. A sanctuary area, it houses the main temple of the minority Jain community. Called Sammat Shikanji Theerth, this temple is dedicated to Parasnath, Basavanath, one of the 24 Theerthankaras of the Jains. As he is the 23rd Tirthankara, his holy temple is considered very important by Jains.

In this case, in 2019, the previous BJP government led by Chief Minister Raghubar Das announced that Parasnath Hill is going to be made an eco-sensitive zone tourist destination. But no work is done.

In this case, the Jharkhand Mukti Morcha-led coalition government has started the work for this purpose. The Jain community strongly opposed this. The Jains feared that the sanctity of the temple would be spoiled by the activities of tourists including alcohol and meat.

Jains have been holding protests in Delhi, Mumbai, Bhopal and other cities for a few days. A protest was also held in Chennai against the decision of the Jharkhand government.

Meanwhile, Union Environment and Forest Protection Minister Bhupender Yadav met prominent leaders of the Jain community in person. Following this, the central government decided yesterday that there is no need to make Jainar’s holy place an eco-sensitive zone tourist destination. The Jharkhand government was also informed of this decision and advised to stop the project.

Along with this, Union Minister Bhupender Yadav has requested the Jharkhand government to stop the consumption and sale of alcohol in the area around the temple of Shiganji Tirthankar.

Union Tourism Minister G. Kishan Reddy also expressed the same opinion. “No action should be taken in Jharkhand to offend the Jain community. He mentioned that the state government should protect the place where one of their holy places is located.

With this, the struggle of the Jain community across the country has been successful. The Jain community is thankful to the Prime Minister Narendra Modi-led government. Sukya Sagar Maharaj (72), a Jain community resident of Jaipur, has been fasting since December 25 to protest the Jharkhand government’s move. He died tragically on the 30th.

Forest areas across the country are on the public register. Thus, it is necessary for the state governments to get permission from the central government to implement any project in the forest area.