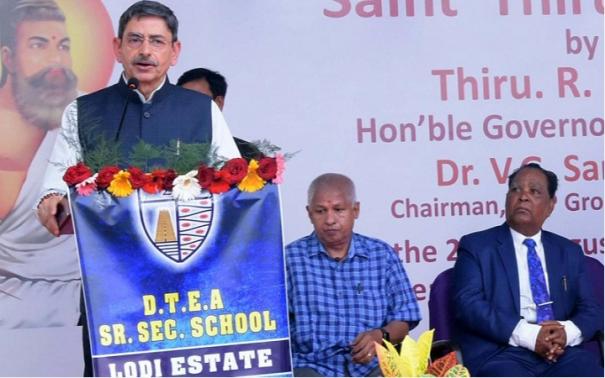 New Delhi: Tamil Nadu Governor RN Ravi has said that the soul of Bhakti has been deliberately destroyed from Thirukkural.

RN Ravi spoke on the occasion: The British East India Company and missionaries like G.U.Pope deliberately hid the soul of Tirukurkal Bhakti.

Thirukkural was first translated into English by GU Pope. His translation is celebrated even today. But that translation has been carried out with a colonial attitude to belittle India’s spiritual wisdom.

The British tried to destroy the great spirituality of India. They did it by destroying Indian history, Indian culture. Therefore, the youth should ignore the translated ancient Tamil literature books of the colonial mentality. Instead the essence of the original book should be imbibed.

Thirukkuralai is now being underestimated as if it is some kind of lifestyle. But it is an epic. In it is the soul of eternal spirituality. The word Adi Bhagavan in the first Thirukkural is derived from the Rig Veda. It is the center of Indian spirituality. But its soul has been deliberately distorted by GU Pope in his translation. He has only referred to Adi Bhagavan as the Primal Deity.

His speech has sparked controversy.

GU Pope Brief Introduction: Born in Prince Edward Island, Canada (1820). Father is a businessman. The family moved to England when he was a child. After studying at Hoxton College, he came to Tamil Nadu in 1839 for religious work. He learned Tamil well within 8 months of sailing. At Sayarpuram near Tuticorin, Ariangaup Pillai studied Tamil grammar and literature under Ramanujak Kavirayar. He learned Tamil, Telugu, Sanskrit, Malayalam, Kannada, German. Along with religious work, he also did educational work and Tamil work in Thanjavur, Udhagamandalam and Bengaluru.

He worked as a professor of Tamil and Telugu at Oxford University, England for 13 years. In 1886, he obtained his master’s degree in Tamil. In the same year he translated Tirukkuralai into English under the title ‘Sacred Kural’.