Joint statement: Confirmation of deepening and raising the pace of Saudi-Pakistani investment cooperation 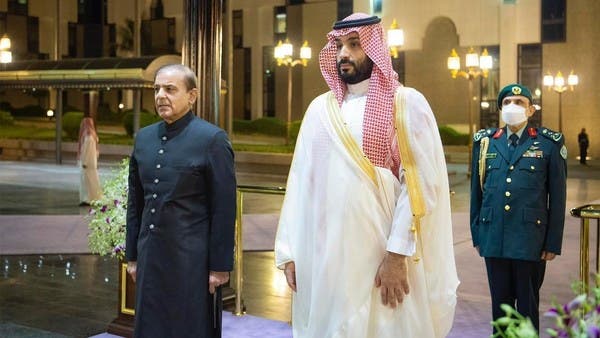 Within the framework of the close historical relations between the Kingdom of Saudi Arabia and the Islamic Republic of Pakistan, the Prime Minister of Pakistan, Muhammad Shahbaz Sharif, paid an official visit to the Kingdom of Saudi Arabia. Prince Muhammad bin Salman bin Abdulaziz Al Saud, Crown Prince and Deputy Prime Minister, received him in Jeddah, where they held a session Official talks, and they discussed ways to strengthen relations in all fields.

In the bilateral matter, the two sides stressed the importance of enhancing work through the Saudi-Pakistani Supreme Coordination Council, diversifying bilateral trade between the two brotherly countries, and intensifying communication between the private sector in the two countries to discuss trade and investment opportunities and translate them into tangible partnerships.

The Kingdom of Saudi Arabia affirmed its continuous support for Pakistan and its economy, including discussing the possibility of supporting the Kingdom’s deposit with the Central Bank of Pakistan amounting to 3 billion dollars by extending its term or through other options, and discussing options to enhance financing of petroleum products and support economic reforms in Pakistan in the interest of Pakistan. and its people.

A statement published by the Saudi Press Agency said that Pakistan appreciates the Kingdom of Saudi Arabia’s continued strong support for it.

The two sides expressed their intention to hold investment forums to introduce the business sectors of both sides to the available opportunities and urge them to hold partnerships in various investment fields, and to work jointly to solve the challenges facing investors in them through continuing the meetings of the Saudi-Pakistani Business Council, and the two sides welcomed the entry of the private sector in the two countries. With investment partnerships in the agricultural and food industries.

The two sides stressed the importance of cooperation between the two countries regarding the opportunities offered by the economic transformation programs that the Kingdom is witnessing within the framework of the Kingdom’s Vision 2030, and to benefit from the distinguished Pakistani experiences and capabilities in a number of sectors to achieve mutual benefit on the economies of the two countries. The two sides also agreed to enhance media cooperation between them, and discuss Opportunities to develop cooperation in the fields of radio, television and news agencies, and exchange experiences and coordination to serve the development of joint media work.