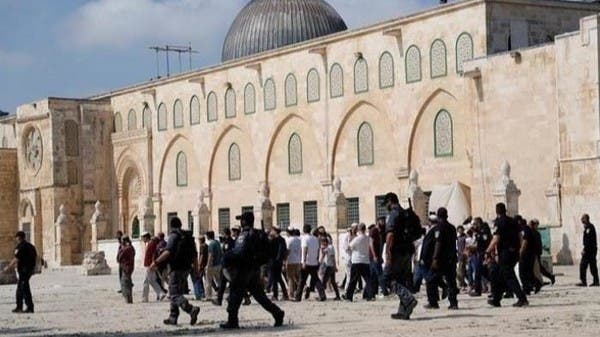 The Jordanian Ministry of Foreign Affairs and Expatriate Affairs condemned allowing Israeli settlers and a Knesset member to storm Al-Aqsa Mosque on Sunday, warning of a worsening of the situation in light of allowing what it described as a “provocative and escalating” march in Jerusalem, in reference to the flags’ march.

A statement published on the ministry’s account on Twitter quoted its official spokesman as saying that the incursions “are a violation of the existing historical and legal situation, and of international law.”

He added that “Al-Aqsa Mosque… in its entirety… is a place of worship purely for Muslims,” ​​stressing that the Department of Al-Quds Endowments and the Affairs of Al-Aqsa Mosque in Jordan is the legal entity authorized to manage the affairs of the campus and regulate entry to it. He called on Israel to stop “the practices and violations against Al-Aqsa Mosque and to respect its sanctity.”

And the Palestinian News Agency reported today that more than 500 settlers stormed Al-Aqsa Mosque, from the side of the Mughrabi Gate, guarded by the Israeli police, adding that the police closed the Al-Qibli prayer hall and surrounded the worshipers and the worshipers inside it, and arrested 10 young men from Bab Al-Silsila.

The agency quoted local sources as saying that dozens of Israeli policemen preempted the settlers’ incursions into Al-Aqsa, and spread in its courtyards, and closed the Al-Qibli prayer hall with iron chains, and surrounded the worshipers inside it.

A concrete with a bike; Social media burst out laughing after seeing the picture from Vellore