Jordanian Minister of Health: The effects of the gas leak in Aqaba have faded 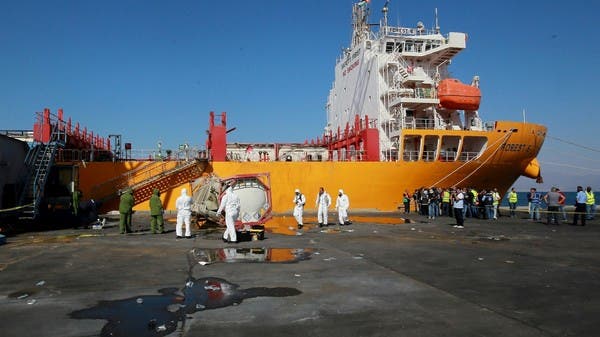 The Jordanian Minister of Health, Firas Al-Hawari, confirmed that the effects of the gas leak in the Jordanian city of Aqaba have disappeared and the situation is under control, after the leakage of toxic chlorine gas from a container that fell from one of the ships yesterday, Monday.

He added in an interview with Al-Arabiya that the death toll is 13, including 8 Jordanians and 5 from other nationalities, pointing out that all deaths are due to direct exposure to gas.

He pointed out that there are about 130 of the injured in hospitals, indicating that they are recovering quickly.

Regarding the availability of medical cadres, he said that 300 medical cadres were sent to Aqaba in less than 6 hours, from different parts of the Kingdom.

It is noteworthy that Prime Minister Bishr Al-Khasawneh, who is in Aqaba, accompanied by the Ministers of Interior and Health, confirmed earlier that the situation is under control, but the authorities decided to keep an isolated distance of four kilometers at the scene of the accident for additional hours.

In turn, Interior Minister Mazen Al-Faraya confirmed that “work has resumed in all Aqaba ports as of this morning, with the exception of berth No. 4, in order to allow the way to ensure its safety once and for all.”

As for the Commissioner for Tourism and Environment in the Aqaba Special Economic Zone Authority, Nidal Al-Majali, confirmed that “the impact of the leaked gas has receded.” “The wind speed at the accident site, which reached about 1.9 meters per second, and its northern direction, contributed to preventing any expansion of the material,” he told the Jordan News Agency.

It is noteworthy that the port of Aqaba witnessed yesterday the fall and explosion of a tank containing the poisonous substance chlorine, which led to the death of 13 people and the injury of 260, including Jordanians and foreigners, according to what was announced at the time by the Governmental Crisis Center.