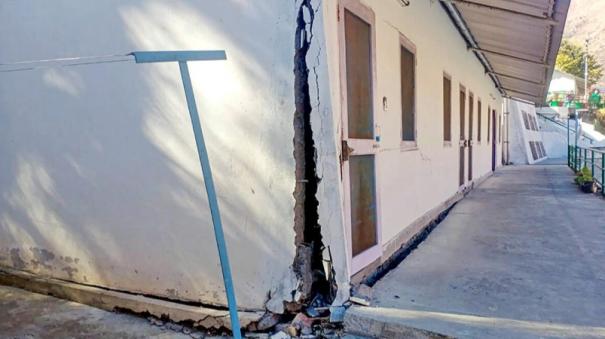 Joshimath: Demolition of houses and hotels in Joshimath, which has been affected by the earthquake, will begin today (Tuesday), officials said.

The holy city of Joshimath in the state of Uttarakhand has been hit by a series of earthquakes. Due to this, people cannot live there. Due to the ever-increasing risk of landslides and landslides, the city has been divided into three categories: dangerous area, hazardous area, and completely safe area.

In this situation, cracks are increasing in 600 buildings in the city of Joshimath, which is buried in the ground. Officials have said that the most affected buildings will be demolished today.

They said: Malary Inn and Mount View hotels, which were affected by explosions, will be demolished today. All the people in the affected areas have been shifted to safer places.

Earlier, District Collector Himansu Khurana had said, “A team from the Union Home Ministry will come to Joshimath city on Tuesday to survey the damage. The most affected buildings will be demolished under the supervision of experts from the Central Building Research Institute, Roorkee.”

The area where the buildings are to be demolished has been declared an unsafe area and the people living there have been shifted to safer places.

Background: The town of Joshimath is situated at the foothills of the Himalayas in Samoli District, Uttarakhand. This town is the gateway to Badrinath temple. There are around 4,500 buildings in Joshimath including houses, hostels and hotels. About 30,000 people live there. At the end of last December, there were huge cracks in various houses and commercial buildings in Joshimath city.