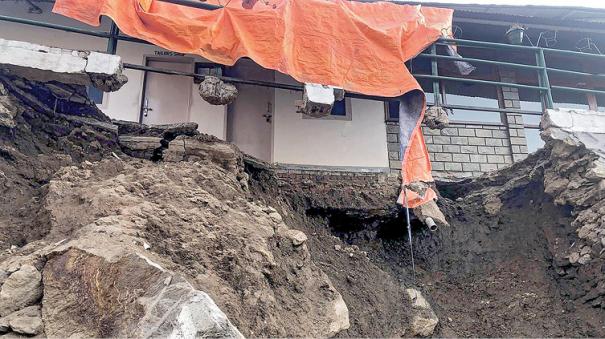 Joshimath: Due to landslides and landslides in the Himalayas, buildings and houses in Joshimath city of Uttarakhand state have suffered huge cracks.

The town of Joshimath in Chamoli district of Uttarakhand is located at the foothills of the Himalayas. There were sporadic earthquakes there 2 days ago. Landslides occurred in some places. This caused massive cracks in 600 buildings and houses.

In this case, a temple in Joshimath city collapsed yesterday. After that, the people evacuated their cracked houses and stayed overnight in the cold in the empty places.

More than 3,000 people have been affected in Joshimath. About 40 families have been displaced from Joshimath. Also, 561 trading companies have also cracked. The city of Joshimath itself has become buried in the earth.

Meanwhile, the affected people have been protesting for the past 2 days demanding temporary rehabilitation and long-term solutions. In Karnaprayak, about 80 km from Joshimath, more than 50 houses have also suffered cracks.

Meanwhile, Uttarakhand Chief Minister Pushkar Singh Thami held a meeting with senior officials yesterday regarding the Joshimath situation. It was decided in the meeting to choose a permanent and safe place for the people of the area.

Samoli district administration is setting up relief camps for the people of Joshimath area. National Disaster Response Team has been ordered to go to Joshimath city. Also, Chief Minister Pushkar Singh Thami has directed the authorities to arrange for helicopters to immediately evacuate people living in hazardous areas. Later, Chief Minister Pushkar Singh Thami visited Joshimath city and visited the cracked areas. Later, he told reporters: We are prioritizing the work of evacuating people living in dangerous areas to a safe place immediately. 4,000 will be given to each family as relief for those who have come to temporary camps. 100 families have been evacuated from danger areas. This was said by the Chief Minister.

What is the reason?: Locals blame the landslides on climate change and continuous construction work in the hilly area.

Here mountains are cut and widened to make highways. This will destabilize the land, said CP Rajendran, Himalayan technicist and geologist at NIAS Centre, Bengaluru.

825 km in the hilly areas of Uttarakhand. Environmental experts have already raised concerns about the construction of the remote ‘Sar Dham’ highway. But citing national security, the Supreme Court rejected the protests in 2021.

Here road widening works are going on from Helong to Marwari area. This is also attributed to cracks in the land area. Due to this, the construction work of this project has been temporarily suspended.