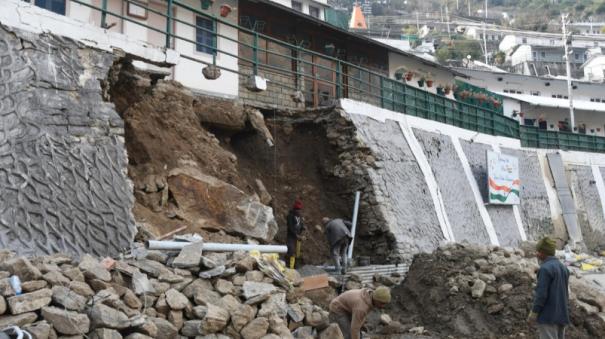 New Delhi: “It is not that every urgent problem of the country should be solved only through the court,” said the Chief Justice of the Supreme Court TY Chandrachud.

A Public Interest Litigation was filed in the Supreme Court regarding the landslide explosion in Joshimath town of Uttarakhand. The petitioner’s counsel requested that the petition be listed for hearing immediately. Responding to it today, Chief Justice D.Oi/Chandrasud said, “Not every important issue in the country needs to be resolved through the courts alone. There are democratically elected bodies to deal with those issues. They will resolve them within their jurisdiction. This petition was filed on January 16- “We can investigate on the date,” he said.

Earlier, the Chief Justice refrained from announcing the date of hearing when a plea filed by Swami Avimukteswarananda Saraswati was sought on Monday to be heard as an urgent case.

In the petition filed by Swami Avimukteswarananda Saraswati last Saturday, ‘The landslides and explosions occurring in houses and lands in Joshimath area should be declared as a national calamity. Provide relief under disaster management plans. The National Disaster Management Authority should be directed to do the same for Joshimath residents.

There is no need for any development work to be undertaken at the risk of human lives and their ecosystem. When such development work is carried out, it is the duty of the state and union territory governments to stop it on a war-time basis. Further, it was stated that this petition is being filed to protect the welfare of the people of Joshimath area, whose lives and properties have been threatened due to landslides.

Background: The town of Joshimath is situated at the foothills of the Himalayas in Samoli District, Uttarakhand. This town is the gateway to Badrinath temple. There are around 4,500 buildings in Joshimath including houses, hostels and hotels. About 30,000 people live there. At the end of last December, there were huge cracks in various houses and commercial buildings in Joshimath city. As cracks continue to widen, Joshimath area has been declared a disaster prone area by the district administration and buildings and houses in dangerous condition are being demolished under the supervision of experts. Earlier, the people in the dangerous area were shifted to safer places.