Joshimath is a city that is being buried by urbanization 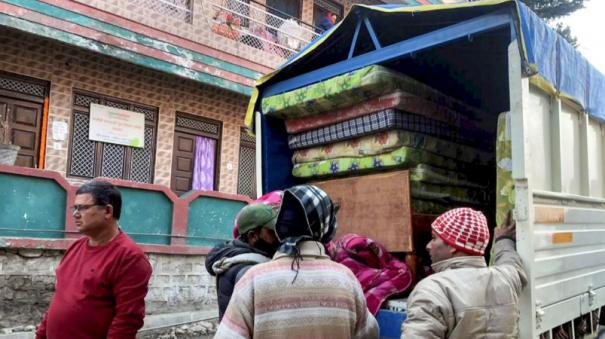 Dehradun: Joshimath, a hill town in the state of Uttarakhand, is slowly sinking into the earth. With a population of over 25,000 people, Joshimath has a poor geographical location.

Hence, landslides and earthquakes are common here. In this situation, large landslides have been occurring in the Joshimath region for the past few days unexpectedly. Due to this, many houses are buried in the soil.

Hundreds of houses and roads are now buried in Joshimath. In this case, the report issued by the Mishra Commission regarding the future problems of Joshimath city in the year 1976 has now come to light.

In the report, the extent to which development work should take place in Joshimath; What projects should not be implemented; The commission has given warnings about which places houses should not be allowed. But beyond that, the city is being buried due to the ongoing construction work.

Locals blame the landslides on the influx of tourists, climate change and continuous construction work in the mountainous area.

Here hills are cut and widened to make highways. CP Rajend Thiran, a Himalayan technicist and geologist at the NIAS Center in Bengaluru, Karnataka, has warned that this will destabilize the region’s terrain.

Due to excessive construction work, urbanization projects and increasing number of tourists day by day Joshimath city is on the verge of destruction.

Around 5 crore tourists have come to Uttarakhand in the year 2022.

A scientific study should be conducted on the condition of hill towns. In 1976, only a few thousand people lived in Joshimath. That number has now risen to 25,000. Joshimath is now in danger due to repeated negligence of the concerned authorities in this matter.

A river runs below the city. Nobody cares about that. Urbanization is gaining momentum in Joshimath. Permission should be given only after a thorough study of the construction work in the city. Urbanization is taking place for the infrastructural facilities of the tourists as they come in large numbers. It should be prevented. This is what he said.

Anoop Nautiyal, founder of Community Development Organization for Communities, said, “If we are not vigilant about this issue now, Joshimath will perish. “Many incidents like Joshimath are waiting to happen in Uttarakhand,” he said.

Displacement of people from 68 houses: Uttarakhand Chief Minister Pushkar Singh Thami told reporters yesterday that the people of 68 houses in the Joshimath city that were in a state of collapse have been evacuated and have now been shifted to a safer place.

There are about 600 houses in the area defined as the danger zone. Evacuation of people in that area is also underway. The Uttarakhand government will give priority to protecting people and property in Joshimath. He said this. Moreover, Samoli District Collector Khurana said that construction work has been banned in Joshima and its surrounding areas, and necessary facilities have been provided to the people staying in the security camps.