Joshimath is a ground-level town on the Rishikesh-Badrinath National Highway in Uttarakhand. 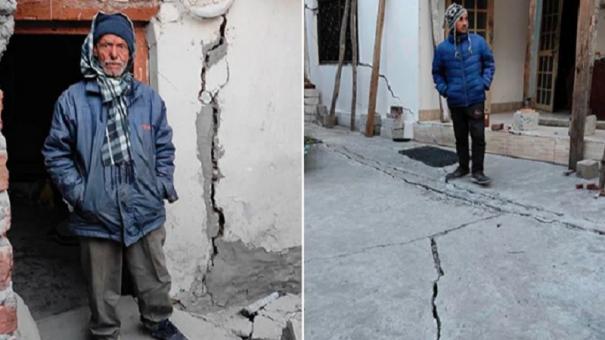 Dehradun: The state of Uttarakhand, known as the land of the gods, is situated in the Himalayas. Rivers like Ganga and Yamuna originate from the snow peaks of Uttarakhand. Badrinath, Kedarnath, Gangotri and Yamu Nothri are located there called Chardham.

Uttarakhand continues to face natural calamities such as landslides and floods due to climate change and urbanization. In the last 1970, due to a cloudburst in Uttarakhand, the Alaknanda river flooded and many villages were submerged.

In June 2013, a cloudburst caused floods and landslides. 5,700 people lost their lives. In February 2021, the Vishnugat hydroelectric power station built on the Thabovan dam was swept away by the flood. 83 people died in this.

After this, on behalf of the National Thermal Power Company, the Vishnugat hydroelectric power station project was intensified at Thabovan Dam. Part of this is 16 km below the city of Joshimath on the Rishikesh-Badrinath National Highway. A tunnel is set up in the distance. It is said that high-pressure gas is generated in this mine and explosions occur in the upper terrain.

According to the last 2011 census, Joshimath has a population of 16,709. There are more than 7,600 houses and shops. Over the past few weeks, various parts of Joshimath have been hit by landslides and cracks in houses. 570 houses have extensive cracks. There have also been explosions on roads. Due to this, the people of Joshimath are vacating their houses and leaving.

According to the environmentalists, “Joshimath city is being razed to the ground due to the projects of the National Thermal Power Company. There is a threat to the lives and property of the people living here. The thermal power company projects should be stopped.”

Uttarakhand Chief Minister Pushkar Singh Thami says, “High officials are conducting an inspection in Joshimath area. I will also go to Joshimath and investigate,” he said. The people of Joshimath area are holding continuous protests against the hydropower plant and road projects. Samoli District Collector Abhishek Tripathi is holding talks with them. The work of the National Thermal Power Company has been stopped as a precautionary measure.