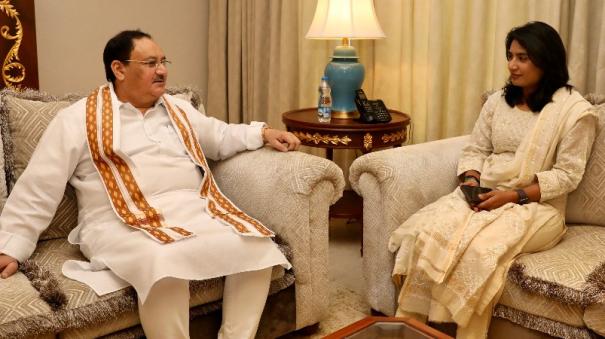 Later JP Natta rested for some time in a star hotel. Then she was met by Mithali Raj, the former captain of the Indian women’s cricket team. Both talked for about 20 minutes.

When reporters asked Mithali Raj about this, she only replied, “It is a courtesy meeting.” However, he is expected to join the BJP soon.

Following the meeting with Mithali Raj, young Telugu film actor Nitin met JP Natta last night. It is said that he will soon join the BJP.

Last week, Union Home Minister Amit Shah, who was in Hyderabad, met actor Jr. NTR. These meetings confirm that BJP is trying to woo actors, actresses and sportspersons to their side in Telangana.

It is noteworthy that the BJP is planning to win the upcoming 2024 assembly elections and Lok Sabha elections in Telangana.