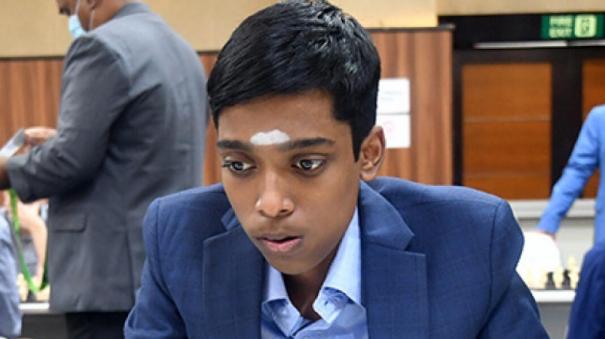 Chennai: The 5th edition of the Meltwater Champions Chess Tour 2022 season is the Julius Baer Cup Chess Tournament online. 16 players including world champion Magnus Carlsen of Norway, Indian players Pragnananda and Arjun Erikaisi participated in the opening round. Each player has to play 15 games each in this series which will be held till the 25th. The top 8 will qualify for the knockout round.

On Day 2, the day before yesterday, Indian player Arjun Erikaisi defeated American Hans Niemann in his 5th round match. Meanwhile, in the 6th round he lost to America’s Levon Aronian. Arjun Erikaisi played against Pragnananda in the 7th round that followed. The game ended in a draw on the 67th move. Arjun Erikaisi also ended his match against Croatia’s Ivan Saric in a draw.

Pragnananda clashed with Carlson in the 8th round. The highly anticipated game ended in a draw on the 67th move. Earlier, Pragnananda had also drawn the match against Poland’s Radoslaw in the 5th round. Pragnananda defeated Germany’s Vincent Keimer in the next round.

Carlson faced American Nieman in his 6th round match. Carlson retired after only 2 moves. Niemann was thus declared victorious. Niemann, 19, defeated Carlson in the Cinquefield series earlier this month. Carlson then quit halfway through the series. The reason for this was that Neiman was involved in malpractice.