Jurgens: I will compete with myself by minimizing my mistakes with the eye 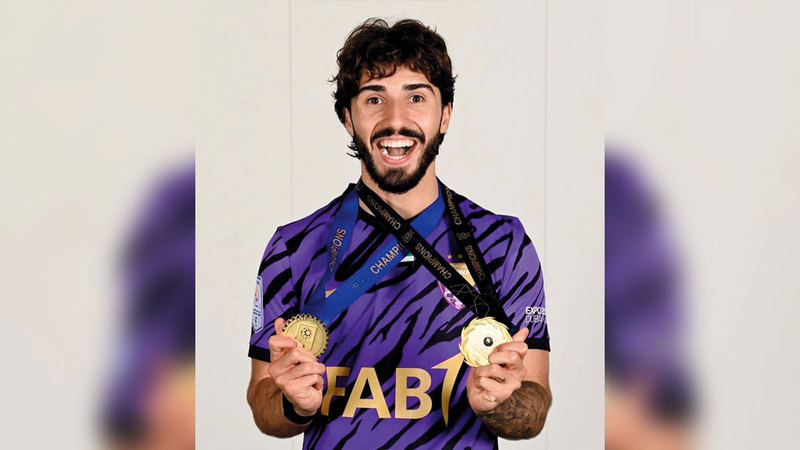 Al-Ain player, Brazilian Eric Jurgens, stressed that he will compete with himself in the new season, which begins next Friday, by reducing errors and developing from one match to another in order to satisfy himself, so that he will be able to make the difference with the rest of his colleagues in the season that awaits them, in which he seeks “Al-Zaeem” to defend the ADNOC Professional League and Abu Dhabi Islamic Bank Cup titles, in addition to competing for the rest of the other titles.

Speaking to “Emirates Today”, Eric expressed his satisfaction with what he did last season, which gave him the Golden Boy award for the best player born in the country after a competition with Sharjah player, Othman Kamara of Guinea, and Ajman player, Moroccan Essam Fayez.

Eric said that the only way to maintain the level in which he appeared is to improve the work and diligence more, and added: “For me it is important to continue to work in order to reduce errors and develop from one game to another. I achieve the desired addition to the team.”

The Brazilian player booked his main seat in the squad of Ukrainian coach Sergei Rebrov thanks to the rising performance he made during the season. The player moved to Al Ain Club in the summer of 2020 from Internacional, with a three-year contract, before the club renewed the player’s contract for the next three years until 2025.

On receiving the Golden Boy award at the Professional League ceremony, last Saturday, the Brazilian player Jorgense confirmed that his happiness with the award is indescribable, and said: “I would like to thank my teammates, coaches, Rebrov and all the club’s fans, as well as my family, for their support for me last season, which I won this award.”

The player confirmed that the award will give him more confidence in the new season, and that at the same time he will enter the new season while he is living in a state of stability, after he completed his marriage ceremony during the summer vacation, noting that he and his wife are waiting for the arrival of their first child.

Eric Jurgens participated in 23 matches in the ADNOC Professional League last season out of 26 meetings, during which he performed enthusiastically in all matches in the defensive and offensive sectors as well. Official statistics issued by the Professional League show that 64.41% of his attempts to seize the ball from his opponent were successful, 50 of his aerial attempts were also successful, in addition to 227 tackles that were also successful with competitors.

His numbers are outstanding last season

■ 64.41% success rate in seizing the ball from his opponent.

■ 50 of his aerobic attempts have been successful.

A match that Eric Jurgens participated in out of 26 in the league last season.