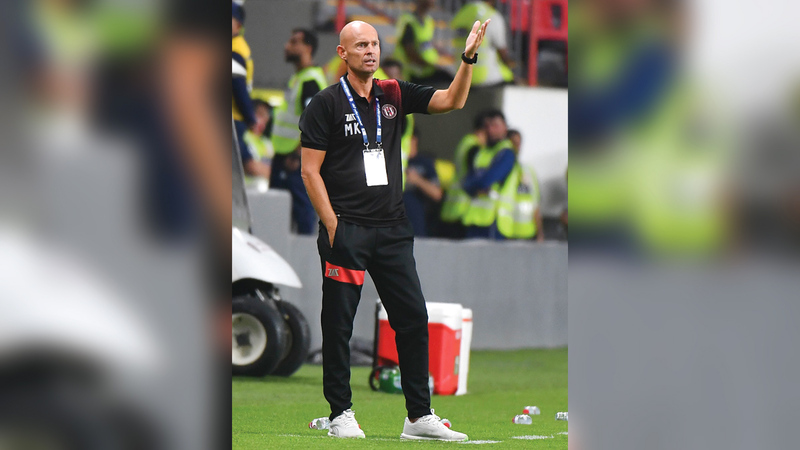 Al-Jazira coach, Marcel Kaiser, confirmed that his team was able to increase its goal-scoring score against Al-Ain during the confrontation between the two teams yesterday evening, in which his team won 2-1 in the third round of the ADNOC Professional Football League, noting that « The pride of Abu Dhabi »extended control over the course of the match, and was the party most in possession of the ball with a good defensive organization as well. Al-Ain is behind in the league standings in fifth place with four points, while Al-Jazira rose to the participation of Sharjah in the lead with the full score (9 points).

Kaiser said in the press conference after the end of the match: “We scored two goals, but we were able to increase our goal score.

The players deserve thanks and praise after they played very well in the match.”

Commenting on the substitutions he made, Kaiser said: “I am happy with the players who participated as substitutes, and for Thulani he was not fully ready, so we decided to play 45 or 60 minutes, and it was better to replace him at half-time. In the second half, and for me I see that these young guys are the future of the island.”

For his part, the Ukrainian team coach, Sergei Rebrov, said that Al Ain’s task was not easy against Al Jazira, explaining that his team succeeded in creating several opportunities, but they were not invested in the required way, and that the team’s performance was affected after the expulsion, stressing that the season is still in The third round of the league competition, and they are required to analyze the team’s performance to correct its course. In response to a question about the reason for Al-Jazira’s superiority in the middle of the field, he said: “Certainly, we analyzed the performance of the opposing team that plays to close spaces in the middle of the field, but as I mentioned to you, we created several opportunities, and sought to impose our method, but we did not invest opportunities, and in football If you don’t take chances and score, you will definitely receive goals.” He concluded: “Practically, we have played only three matches so far, and the competition journey is still long, and our performance against Ajman in the first match in the league despite the tie was good, and I would like to assure the players and fans that the current season will not be easy, and we are required to analyze the performance and work to correct mistakes in the stage.” coming.”