IndiaKarnataka Congress leaders came in a horse-drawn carriage to the assembly to...
India 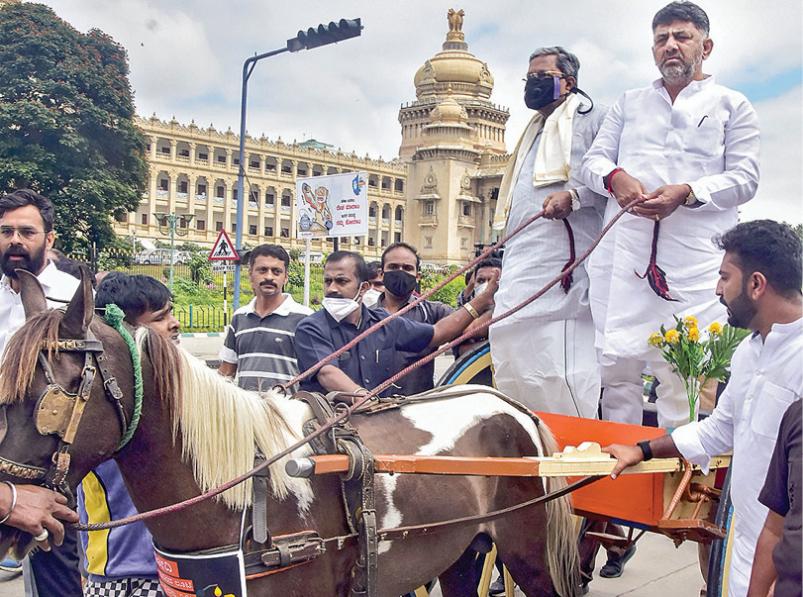 Of the Karnataka Legislative Assembly Rainy season meeting Since its inception on the 13th, Congress leaders have been staging various protests condemning the rise in petrol and diesel prices.

Congress MLAs who came to the Assembly on bicycles last week staged a protest in front of the Gandhi statue. Karnataka Congress Congress MLAs, including Opposition leader and senior Congress leader Chidramaiah, led by leader DK Sivakumar, and former deputy chief minister Parameshwar came in horse-drawn carriages from the Congress office on Queens Road to the assembly building Vidhan Sabha.

The price of spices has gone up due to the rise in Congress’ fuel prices. Thus the poor can only see the masala dosa with their own eyes’, they said and distributed pictures of the masala dosa.

Speaking on the occasion, Chidramaiah said, “According to the international market value, the price of petrol is only Rs. 38. A liter of petrol sells for Rs 104.70 and diesel for Rs 94.27 due to excessive taxation by the central and state governments. Petrol price there has come down by Rs 3 per liter as the Tamil Nadu government has reduced taxes. Why is the government of Karnataka exploiting the people without doing that? ”