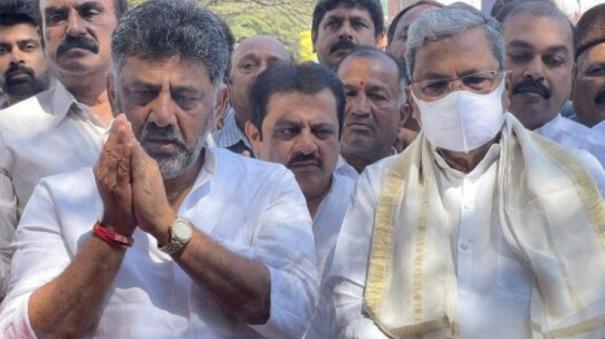 Bengaluru: The Congress party will start its election campaign in the state tomorrow in view of the upcoming Karnataka assembly elections.

Election excitement has increased in the politics of the state as elections have to be held before the month of May for the Karnataka Legislative Assembly. The main opposition Congress will start its election campaign tomorrow in view of the assembly elections. The Congress party today announced the details of this Yatra named People’s Voice. The Yatra starts from Belagavi in ​​North Karnataka.

Let’s tell the people about what changes will happen with the formation of Congress government in Karnataka. We will present all the corruptions of the BJP government, the 40 percent commission they get, how they rob like Alibaba and 40 thieves, among the people,” he said.

After this, Siddaramaiah said, “Karnataka Chief Minister Basavaraj Tommy is a very weak Chief Minister. None of the Chief Ministers in Karnataka has been as weak as him. He is afraid of central ministers. Karnataka Rs. 5,495 crore as a special fund was recommended by the 15th Finance Commission. But Finance Minister Nirmala Sitharaman refused to grant it. Basavaraj Pomi is not brave enough to get the funds.

In addition, this government has taken a loan of 3 lakh crore rupees in the last 4 years and has created a huge debt burden for the state. Per capita in Karnataka Rs. 83,000 crore debt burden has been shouldered by this government. If this is the case, how will the state progress?” he asked.