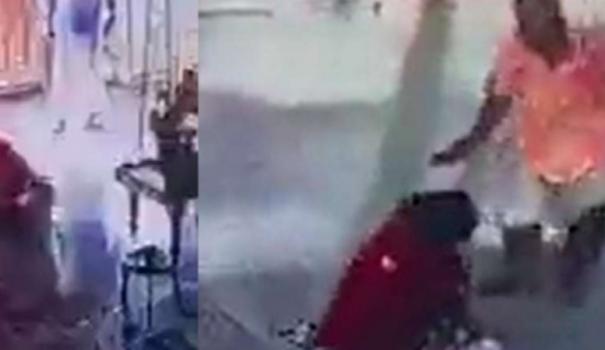 Bengaluru: A Dalit woman who entered a temple in Karnataka was severely assaulted by a trustee and kicked out. In this situation, the person who attacked the woman was arrested.

A Dalit woman visits the Lashmi Narasimha temple in Amritalli area of ​​Karnataka capital Bengaluru on December 21 for worship. Then there was an argument between Munikrishna, the trustee of the temple, and the woman. Then Munikrishna violently attacked the woman who entered the temple, pulled her hair and pushed her out of the temple. CCTV footage related to this was released and caused a stir.

In this situation, based on the woman’s complaint, Muni Krishna was arrested by the police and brought before the court for questioning, the Karnataka police said.

While telling the police about the attack, Munikrishna said, “The woman said Perumal was her husband and wanted to sit near the idol in the sanctum sanctorum. When his request was denied he spat on the priest. Because of this, I beat him and kicked him out.”

This video is from a temple in Bangalore, where a Dalit woman is being beaten up and dragged out of the temple premises for offering prayers inside the temple! pic.twitter.com/CC7mQXu4Mh