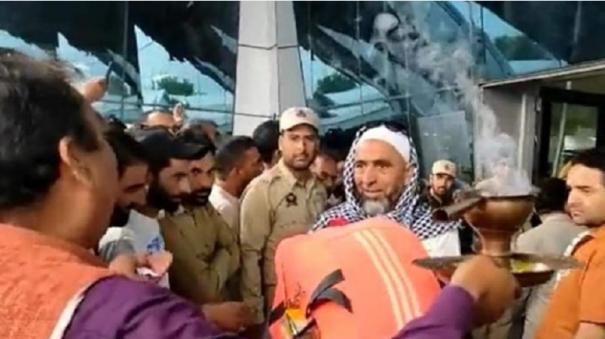 Srinagar: Kashmiri Pandits gave a warm welcome to the first batch of Muslims returning to Kashmir from Haj pilgrimage at Srinagar airport.

One of the long-standing traditional customs in Kashmir is the welcoming of pilgrims by Kashmiri Pandits returning from the Haj pilgrimage. The traditional welcome ceremony followed to uphold coexistence and brotherhood was held at the Srinagar Airport on Saturday.

The first part of the Muslim pilgrims returning from this year’s Haj pilgrimage were traditionally welcomed by Kashmiri Pandits by performing Izband Daen (burning of Isfnd or Harmala seeds in a copper pot to signify a clean and auspicious environment).

Then the Pandits looked at the Muslims and said “Mubarak… Mubarak…”. The Muslims also responded by saying congratulations. After completing the pilgrimage, they shook hands with the pilgrims and embraced them. Pictures and videos of the event were widely shared on social media by Muslims and Pandits alike.

Mohit Pan, spokesperson of the Jammu and Kashmir People’s Democratic Party posted on Twitter, “Our Kashmiri Pandit brothers welcomed the Hajj returning from Haj at Srinagar Airport by singing ‘Naat’ in traditional style, asking for the blessings of the Holy Prophet. This is our united culture. Those who believe in Islam will help Amarnath Yatra. Saiva. Followers of religion are messengers of peace

Both sections of the people have reclaimed the identity of Kashmiriad through the ideas of harmony and coexistence. The Muslims who celebrated Eid with the Baldali Amarnath pilgrims, the Pandits who welcomed the Nad Badi Haj pilgrims, these are the witnesses of how Kashmir has bounced back against every ordeal.”

Similarly, people have also recalled Muslims welcoming pilgrims during the Amarnath Yatra, which was suspended for the past two years and started this year.

This is the first time since the riots in the Valley in 1989 that Hindu Pandits have traditionally welcomed their Muslim brethren returning from the Haj pilgrimage. This year 80 thousand people from India are performing Hajj. 7 thousand of them are from Jammu and Kashmir.

Our Kashmiri Pandits welcoming Hajis at Srinagar airport today by singing traditional Naat seeking the blessings of Prophet. This is our syncretic culture believers of Islam are enablers of Amarnath Yatra & the followers of Shavism are messengers for unity. pic.twitter.com/5E7egZ2D7p