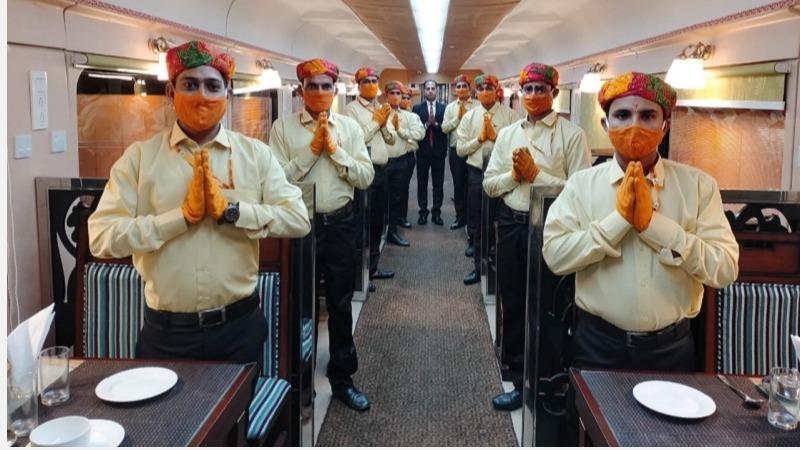 Madhya Pradesh Ujjain The famous Sri Mahakaleshwar Temple of Lord Shiva located in the city hosts the Simhastha Kumbh Mela once in 12 years. The country’s first Ramayana Circuit train departed from Delhi Safdarjung Railway Station on November 7 for a 17-day journey ahead of Kumbh Mela.

The train travels to 15 places associated with Ram’s life. The train will cover a distance of over 7,500 km and will take pilgrims to places like Ayodhya, Prayagraj, Nandigram, Janakpur, Chitrakoot, Sitamarhi, Nashik, Hampi and Rameswaram.

For catering staff serving food on this train IRCTC It recently issued an order on Twitter imposing a dress code. Accordingly the staff of the Ramayana Express worked in saffron attire. There is strong opposition to this.

Hindus in Ujjain have been protesting against the move by the railway department since Monday morning Sadhus Expressed strong opposition.

Employees have objected to wearing saffron, saying it is “an insult to Hinduism”. They warned that the train would stop in Delhi on December 12 if the dress code was not lifted.

Letter to the Minister of Railways

Wearing khawi with a sadhu-like helmet and wearing ‘rudratsa’ (sacred seeds) and ‘mala’ (garlands) is an act of insult to Hinduism and its saints. If the saffron dress code is not changed, at Delhi Safdarjung Railway Station Sadhus The train will stop. This is necessary to protect Hinduism, ”he said.

In this case, the news was published in the media IRCTC Posted a tweet. In it ” dress code for saffron dress for staff serving food in train catering IRCTC Gets back. We apologize for any inconvenience this may have caused.