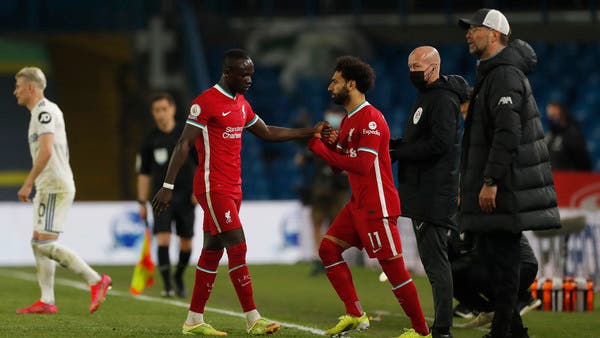 Liverpool coach Jurgen Klopp admitted that his team is missing Mohamed Salah and Sadio Mane during their participation in the African Nations Cup, but he cannot blame their absence after the goalless draw against 10 Arsenal players on Thursday.

Liverpool achieved this disappointing result at Anfield in the first leg of the League Cup semi-final, as it stumbled in front of Arsenal’s tight defense despite the sending off of Granit Xhaka in the 24th minute.

Egypt’s Salah is the top scorer in the English Premier League with 16 goals, while Senegal’s Mane scored eight goals.

“The situation is clear, they are not here and the two are world-class, do we miss them?” Klopp said before facing his guest, Brentford, in the league. Yes. But with Sadio and Salah we stumbled before in front of ten players and with them together on the field we still don’t create enough chances, we have to penetrate a regressing defensive block and this is the most difficult thing in football.

The German coach added: This is always usual and we did not succeed last night and were not effective enough at times, but this is the situation and it is not possible to act on the absentees. We are looking for how to improve and that is what we will do.

Sunday’s match will be Klopp’s 350th with Liverpool, and the two teams tied 3-3 in London in the previous confrontation in September.

Klopp expressed his pride in his score and hopes to enjoy in the coming years, but he prefers to focus on the match.

“It’s good but the numbers are not important to me, 350 is a great number and better than 15,” he continued.

He confirmed that Liverpool, who is third, 11 points behind leaders Manchester City, but has a game in hand, is not suffering from injuries and expected Brentford to be a difficult competitor again.

He continued: “We are definitely careful and we must prepare well, they are distinguished in their set-pieces and their direct way of playing, their first season in the Premier League is wonderful and this is impressive of course.”