Koeman accepts defeat and reveals the difference between Barcelona and Bayern 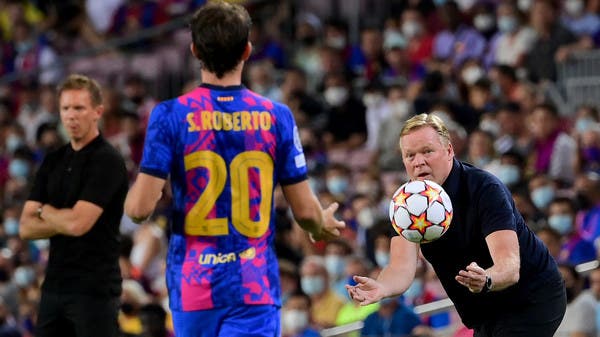 Barcelona coach Ronald Koeman accepted his club’s 3-0 home loss to Bayern Munich in the Champions League on Tuesday and said fans should be realistic given the level of the team.

Thomas Muller scored the first goal with a deflected shot, giving Bayern a deserved lead, before Robert Lewandowski added two goals after the break, as the German champions again beat Barcelona after winning 8-2 against the same club in August last year.

The Dutch coach referred to the injury problem in Barcelona in the absence of strikers Osman Dembele, Ansu Fati, Martin Braithwaite and Sergio Aguero, in addition to the participation of Jordi Alba, despite feeling ill before the match.

“You have to be realistic in life,” Koeman told a news conference. Our young players showed that we have a future. A lot of players will come back from injury and this is what it is, we know we are missing a lot of players in attack, and we have to wait several weeks until we have more alternatives and speed up front, I don’t want to look for excuses but everyone knows the problems we have with the absence of players .

Barcelona did not hit a shot on goal over the 90 minutes, and while Bayern fielded some experienced substitutes such as Serge Gnabry and Kingsley Koeman, Koeman fielded three youngsters in search of compensation.

“It is very difficult to play against a team like Bayern when you don’t have the necessary speed in attack,” Koeman said. We must accept that and we will continue to work. We must realize the name of the opposing team.

He added: “In order to damage a team like Bayern you have to be at the top of your level and you have to admit when the opponent is better, but I am a little bored of talking about the same thing.” In a few weeks the team will be different because we will have more players available and we will be ready.

He continued: Bayern is among the favorites to win the Champions League, and we are currently experiencing problems. We were a little unlucky in the first goal, but in the second half the opponent proved to be the best side now.

Previous articleIn Russia, 18 841 cases of coronavirus were detected per day
Next articleSources: “Taliban” leaders in a state of coup in the presidential palace