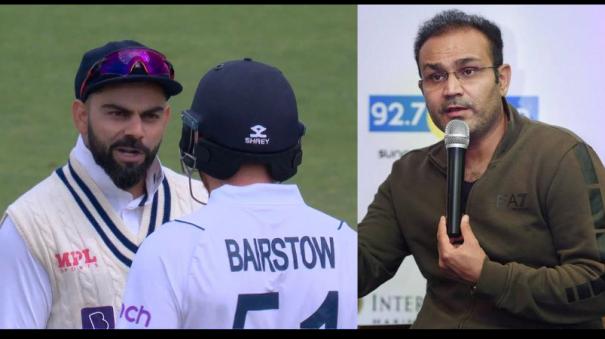 New Delhi: Sehwag said that Virat Kohli, who was playing like Pujara, sledged English batsman Bairstow unnecessarily and changed him to attacking mode like Rishabh Pant.

Indian cricket team is touring England and playing cricket series. Both teams are currently playing a Test match at the Edgbaston Cricket Ground. In the first innings, India scored 416 runs and England scored 284 runs. India started the second innings with a lead of 132 runs.

Former India captain Virat Kohli engaged in a heated war of words (sledging) with Bairstow when the England team batted in the first innings of this match. The New Zealand teammate seems to have drawn Bairstow into a frenzy by comparing the bowling of Saudi. He also told me to keep batting quietly. That moment was a game-changer. At that time Bairstow had scored just 13 runs off 61 balls. After that he scored 93 runs off 79 balls. In the end it was Kohli who caught Bairstow and dismissed him. In this case, Sehwag has criticized it now.

In the second innings, Kohli scored 20 runs off 40 balls and was bowled by Stokes.

It’s tense out there between Virat Kohli and Jonny Bairstow #ENGvIND pic.twitter.com/3lIZjERvDW