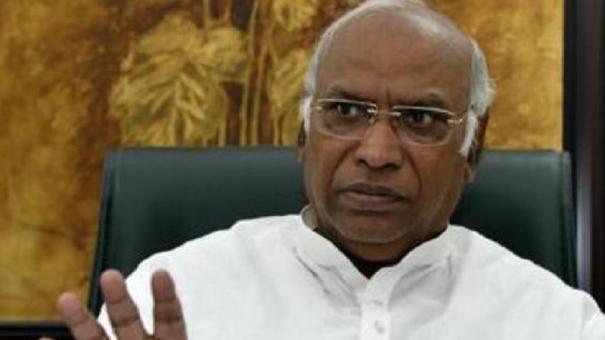 New Delhi: “We will pressurize Rahul Gandhi to accept the responsibility of Congress President,” said Leader of Opposition in Rajya Sabha Mallikarjuna Kharge.

While the election of the Congress President was supposed to be held by September 20, the election has been postponed to October. There are constant demands within the party that Rahul Gandhi should return to the post of Congress President. In this situation, senior Congress leader and former Union Minister Mallikarjuna Kharge said, “We will pressurize Rahul Gandhi to take the post of Congress party president again.

Congress party leadership should have support from Kashmir to Kanyakumari, from West Bengal to Gujarat. He should be well known. To be a ‘Pan India’ face. There is no one else in the Congress party with such status except Rahul Gandhi. If anyone has, please let me know. We are considering.

The Congress Working Committee meeting will be held tomorrow through video. It discusses the Congress elections. In this, some leaders have decided to urge Rahul Gandhi to take the leadership.

As Ghulam Nabi Azad has quit the Congress party, it is said that Anand Sharma may also quit next. It seems that these will also be discussed. Ghulam Nabi Azad, who resigned from the Congress yesterday, made a barrage of accusations against Rahul Gandhi. Supporting his views, former minister Prithviraj Chavan had also said that the Congress leadership should be led by someone who is independent and not a puppet. In this situation, senior leader Mallikarjuna Kharge has spoken in support of Rahul Gandhi.