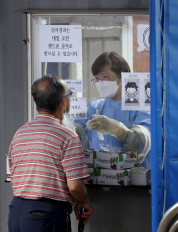 Digital Desk, Seoul. The spread of the virus has gradually decreased in recent weeks. New COVID-19 cases on Sunday dropped to a nearly two-month low mainly due to fewer tests conducted during the Chuseok festival.

The Korea Disease Control and Prevention Agency (KDCA) said the country reported 28,214 new cases of COVID-19, including 228 cases from overseas, taking the total number of cases to 24,004,887.

The festive holiday began on Friday and will last until Monday, Yonhap news agency reported. Infection cases on Sunday were down from Saturday’s 42,724 amid the Chuseok festival or the Korean autumn harvest festival. It was also the lowest daily count since July 18, when the figure stood at 26,275.

There were 48 deaths on Saturday from Kovid-19 in South Korea, but 47 on Sunday. The death toll has risen to 27,476. The number of critically ill people was 525 on Saturday, which rose to 532 on Sunday. There has been a steady decline in daily infection cases after the number of cases reached about 180,000 in mid-August.