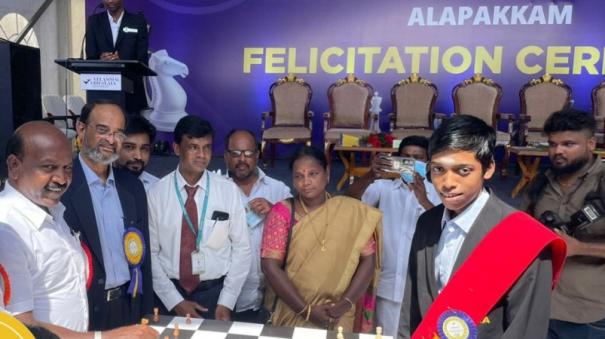 May.E. India won the series against the islands

Port of Spain: India won the 2nd ODI against West Indies by 2 wickets to clinch the ODI series 2-0.

Chennai: The 44th Chess Olympiad will begin on 28th at Mamallapuram next to Chennai. The teams representing India in this series include Athipan Baskaran, SB Sethuraman, Karthikeyan Murali, Vaishali, Pragyananda and Gukesh from Velammal School.

Narayanan Srinath, Shyam Sundar and Priyadarshan, who are coaches along with them, are former students of Velammal School. In this case, an appreciation ceremony was held for them by the Velammal Group yesterday at the Velammal Vidyalaya School, Alappakkam, Chennai. Tamil Nadu Health Minister M. Subramanian attended as a special guest and congratulated the students.

Birmingham: The Indian boxing team participating in the Commonwealth Games returned to the Commonwealth Games Village after completing training in Ireland yesterday. Sandhya Gurung, then the personal trainer of Indian Olympic medalist Lovlina Borgohain, was not allowed into the village because she did not have an authorization card.

In this case, Lovlina wrote in her Twitter post, “My coaches who helped me win a medal in the Olympics are kicked out every time. It affects my training. Due to which I am subjected to mental harassment. My trainer Sandhya has been kicked out of Commonwealth Village. Another coach has also been sent to India.