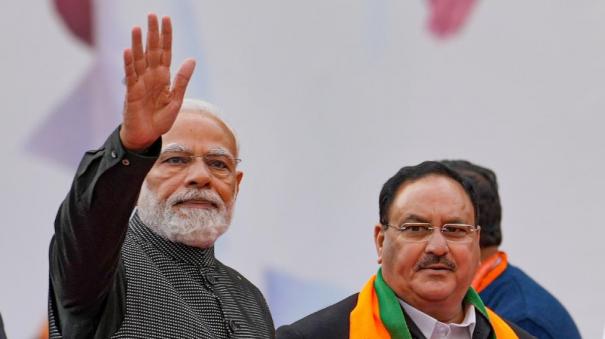 The 2-day national executive meeting of BJP started yesterday at the NDMC convention center in Delhi. On the first day of the meeting, the Assembly elections to be held in 9 states this year and strategies to win next year’s general elections were discussed. Political and economic issues were also discussed in the meeting. Exhibitions were also held on various themes. Party officials from across the country participated in this National Working Committee meeting.

A socio-economic resolution was passed in the 2nd day meeting held yesterday. In this, Prime Minister Narendra Modi’s leadership was praised for transforming India from the list of 5 worst economies to the 5th largest economy. Completion in politics and administration, government schemes to fulfill the needs of the people were also pointed out in the resolution. Also, the BJP National Committee expressed its gratitude to Prime Minister Narendra Modi for the construction of Ram temple in Ayodhya. The resolution commended India for improving the digital money transfer environment in the country and for 40 percent of the world’s digital money transactions to take place in India. The resolution also pointed out that the country’s tax collection has increased by 22.6 percent due to Goods and Services Tax.

Opposition parties have been mocking the BJP for asking the date for construction of Ram temple in Ayodhya. Now the Ram temple has been constructed and the date of its opening has also been announced. In the last eight and a half years, the central government has made the Indian economy and society more inclusive and self-reliant. Development for all, progress for all is not just a slogan. That is the philosophy of BJP.

When we came to power, India was among the worst 5 countries in terms of economy. Now, as the country completes 75 years of independence, it has overtaken the UK as the 5th largest economy. Free ration for the poor, own house for all, free vaccination during the corona Pandemic were also included in the executive committee resolution. Under Prime Minister Narendra Modi’s rule, India’s contribution to global economic output has risen from 2.6 percent to 3.5 percent. This was said by Union Minister Dharmendra Pradhan.

The service to the people during the Corona period under the leadership of BJP leader Natta was highly commendable. Also, under his leadership, the BJP has registered a huge victory in the elections held in many states. I have full faith in Prime Minister Narendra Modi and BJP President Natta Chief. Therefore, JP Natta will continue to be the President of BJP till June 2024. Under their steady leadership, the BJP will register a better victory in 2024 than it did in 2019. This is what he said.