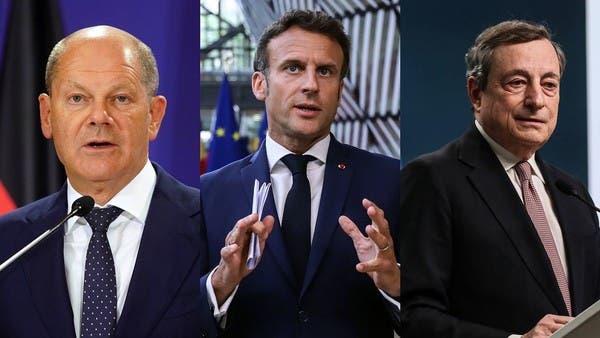 German and Italian media reported that Macron, Schulz and Draghi were on the train to Kyiv.

Macron, whose country currently holds the presidency of the European Union, sent signals to Kyiv on Wednesday, by visiting one of the NATO bases in Romania.

In response to a question about the visit to Kyiv, the French president said: “I think we are at a moment when we need to send clear political signals, we the European Union, to Ukraine and the Ukrainian people while they have been showing heroic resistance for months.”

This visit constitutes a precedent for the leaders of three major European Union countries since the beginning of the Russian military operation in Ukraine on February 24.

The three leaders are meeting with Ukrainian President Volodymyr Zelensky to discuss military support and Ukraine’s application to join the European Union. France, Germany and Italy support this request, but in the long term.

Regarding its official request to join the European Union, Ukraine does not expect from the European summit to be held on June 23-24, less than a decision of the 27 countries to start a negotiation process that may last years.

The Ukrainian president is expected to repeat his request to provide Kyiv with new shipments of heavy weapons, which is essential to confronting Russian firepower.

“We are with you, be with us,” Zelensky told Czech lawmakers in Prague on a conference call, repeating a slogan chanted by a Czechoslovak radio announcer in 1968 while the Soviet occupiers were trying to shut down the radio.

“Today, while the people of Ukraine are fighting for their freedom against the brutal invasion of Russia, we are using these words to address all the nations of Europe and the democratic world,” he added, stressing that “Ukraine must get everything necessary to achieve victory.”

On Wednesday evening, Zelensky expressed his “gratitude” to the United States for the new batch of military aid announced by his US counterpart, Joe Biden, by phone.

“The United States announced a new reinforcement of our defense, a new batch of $1 billion in aid,” Zelensky said in his daily video message on Wednesday evening. “I would like to express my gratitude for this support because it is especially important for our defense in Donbas,” the region in eastern Ukraine that is currently the target of Russian attacks, he added.

The US aid includes, in particular, artillery pieces and additional missiles.

For his part, US Defense Secretary Lloyd Austin on Wednesday called on his allies to “step up” arms shipments to the Ukrainians.

“Ukraine is facing a pivotal moment on the battlefield,” the US Secretary of Defense announced during a meeting at NATO headquarters in Brussels for the countries of the “contact group” established by the United States to help Kyiv. “Therefore, we must intensify our joint commitment” and “redouble our efforts so that it can defend itself,” he added.

This victory passes through the Donbas region (eastern Ukraine), which has been witnessing a fierce battle for days between Russian and Ukrainian forces.
Since their attack on Kyiv in March, Russian forces and pro-Moscow separatists who have controlled part of this industrial zone since 2014 have set a goal of controlling all of Donbass.

Fighting has been concentrated for days in Lysechantsk and Severodonetsk, two major cities in the Donbass. The Ukrainian authorities have admitted in recent days that their forces were expelled from the city center of Severodonetsk and had only “complex channels of communication” with them after the destruction of all bridges to Lysekhansk.

For its part, the United Nations expressed concern about the consequences of the food crisis caused by the Russian operation in Ukraine.

The United Nations High Commissioner for Refugees, Filippo Grandi, warned that if the world did not succeed in stopping this crisis, the record number of displaced people, which reached 100 million people, would be swelled by “a large number of people”.