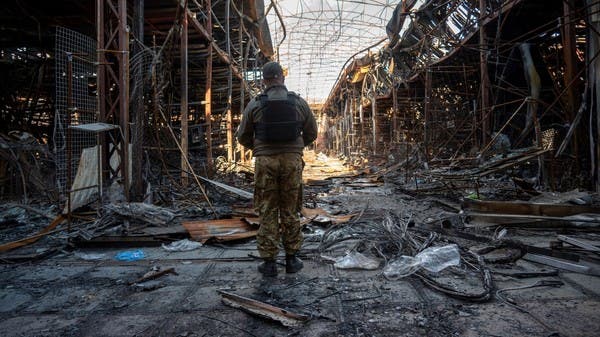 As the fighting against Russian forces continued in the east of the country, Kyiv accused Russia of firing phosphorous bombs on the city of Kharkiv (in the northeast).

The General Staff of the Armed Forces confirmed in a statement today, Sunday, that the Russian forces fired phosphorous bombs on the Kharkiv region.

It also indicated that the Russian forces continue to launch missile and air strikes on the country’s military and civilian infrastructure, including the capital, Kyiv.

Mining of the banks of the Ingolets River

In addition, the Russians were accused of mining the banks of the Ingolets River to impede a possible advance of Ukrainian forces in Poh, in the south of the country, according to the Ukrainian news agency.

To the east, Kyiv accused the Russian forces of firing artillery shells at infrastructure facilities in the settlements of Starikov and Katrinivka in the Sumy region and the settlement of Kamianska Sloboda in the Chernihiv region.

Ukrainian tank in the vicinity of Kharkiv (AFP)

Russia also conducted aerial reconnaissance with drones in the Sumy and Chernihiv regions.

The Russian forces withdrew last month (May 2022) from the vicinity of Kharkiv towards the Russian border, after entering a small part of the main city in eastern Ukraine.

It is noteworthy that since last March, Moscow launched the second phase of its military operation on Ukrainian territory, focusing on the eastern regions, after its retreat from the vicinity of the Ukrainian capital.

Russian forces are seeking to control the Donbass region, where many pro-Moscow Ukrainian separatists are present, with the aim of linking the regions in the east with the Crimea, in the south, which they annexed in 2014.