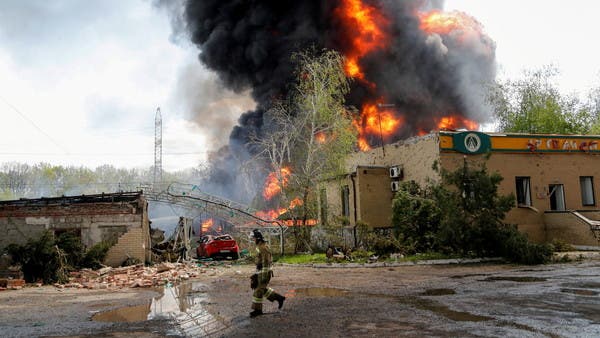 Today, Thursday, the Russian army bombed again with missiles the Kremenchuk oil refinery in the Poltava region in central Ukraine.

“Four missile strikes targeted the Kremenchug oil refinery,” said the head of the military administration of the region, Dmytro Lunin, noting that explosions were heard in Poltava, according to the Ukrainian news agency.

According to the agency, Russia targeted the refinery last month with nine missile strikes, which severely damaged it.

Last April, Russian Defense Ministry spokesman Igor Konashenkov confirmed the destruction of sites at an oil refinery in Kremenchug, in the center of the country.

He also announced in a press briefing that the Russian forces had destroyed, with long-range, high-precision weapons, facilities for the production of fuel in an oil refinery on the outskirts of the city of Kremenchug in the center of the country, in addition to facilities for storing oil products used by the Ukrainian forces.

Russian Defense: Downing of a drone and 3 “Tochka-O” missiles over the island of Zmenyi

For its part, the Russian Defense Ministry announced today that it had shot down a drone and three “Tochka-O” ballistic missiles over the Ukrainian island of Zmynyi, which is under the control of its forces in the Black Sea.

The announcement came during a press briefing held by the Ministry’s spokesman, Igor Konashenkov, regarding the outcome of the operations conducted today by the Russian forces, within the framework of their military operation in Ukraine.

Konashenkov confirmed that the Russian forces today targeted four command posts, 38 mobilization areas, combat vehicles and four ammunition depots in the city of Soledar, north of Donetsk, as well as a special anti-artillery radar produced in the United States.

He continued, “As a result of the strikes, more than 170 nationalists were eliminated and 41 combat mechanisms were damaged.”