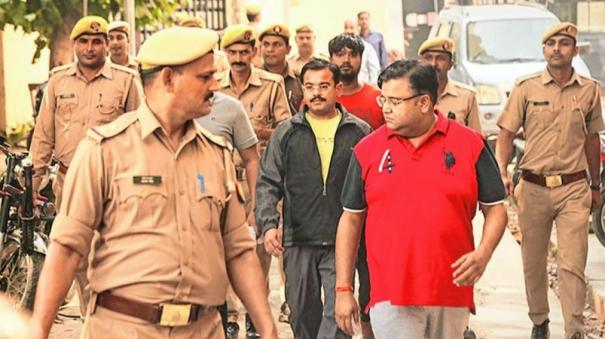 New Delhi: The Uttar Pradesh government has opposed the grant of bail to the son of Union minister Ajay Mishra, one of the accused in the Lakhimpur carry case, in the Supreme Court.

A bench comprising Justice Suryakant JK Maheshwari heard the bail plea of ​​Ajay Mishra’s son. The judges then asked on what basis bail should not be granted. The Additional Advocate General appearing for the Uttar Pradesh government said, “This is a very heinous and heinous crime. If he is granted bail, it will send a wrong message to the society.”

The judges then said, “We are looking at the prima facie angle that he was involved in the incident, the accused, not innocent. Did he try to destroy the evidence?” They asked.

The Additional Advocate General, who responded, said that this had not happened so far. Senior advocate Dushyant Dev, appearing on behalf of the anti-bail petitioners, said, “The incident was a conspiracy and a premeditated murder. This can be shown from the charge sheet. The accused is the son of a powerful person. A powerful lawyer is defending him.

Senior advocate Mukul Rohatki, appearing for Mishra, objected to this argument. He said, what is this?, we are appearing everyday, is this a reason not to grant bail? he asked. He also said, “His client is in jail for more than a year. Looking at the way this case is going, the case may take another seven or eight years. The complainant in this case, Jagjit Singh, was not an eyewitness to the incident. He has filed a complaint based on what he heard.

My client got bail in the first case. This is no cock-bull story. My party is not guilty. “There are no old criminal cases against him.”

Lakhimpur Gari violence… On the morning of October 3 last year, Union Minister of State Ajay Mishra and his son Ashish Mishra along with State Deputy Chief Minister Kesav Prasad Maurya attended a program in Lakhimpur district of Uttar Pradesh. On their way, at a village called Gari, farmers had gathered to show the Union Minister a black flag. Four farmers were crushed to death when the Minister’s son’s vehicle rammed into the gathering of Visayas. Following this, the police resorted to baton to control the riots between farmers and BJP supporters. A total of 8 people died in these incidents.

Footage of the car allegedly carrying the minister’s son ramming into the farmers has gone viral on the internet and has sent shockwaves across the country. However, Minister of State for Home Affairs Ajay Mishra had claimed that his son Ashish Mishra had nothing to do with the incident. In this case, 13 people including Ashish Mishra were arrested and a special investigation team was investigating the case. In the 5,000-page charge sheet filed by the Special Investigation Unit, the Lakhimpur Carry incident was not an accident. A well-planned conspiracy murder’ was mentioned. Meanwhile, Ashish Mishra was released from jail on February 10, after the Allahabad court granted bail.