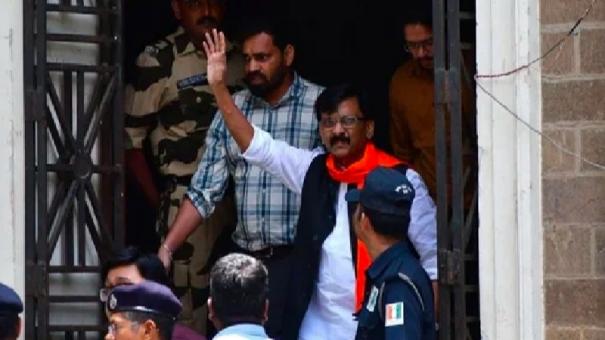 The court issued the order saying, “After hearing the arguments of both sides in the case, we consider it necessary to allow the concerned person to be detained and interrogated. However, it is not possible to allow an investigation for 8 days. Therefore, the court allows the enforcement department to interrogate Sanjay Raut for 4 days.”

Sanjay Raut’s lawyer then intervened and demanded that “Raut should not be questioned till midnight as he is a heart patient”. The enforcement department said, “Normally they don’t interrogate anyone after 10pm.” Sanjay Raut has been allowed to take home food.

Case Background: Siddharth Nagar, also known as ‘Batra Sal’ in the suburb of Goregaon in north Mumbai, had 672 houses spread over 47 acres. Patra Chal Society was formed by the Maharashtra Housing Authority to develop the area. The organization had tied up with Guru Ashish Construction (GAC) in 2008.

Accordingly, the company has to build replacement houses for the 672 houses to be demolished in the Batra Sal area and houses for the Maharashtra Housing Authority. After that, it was informed that the remaining space can be sold by the company.

This GAC is a subsidiary of real estate company HDIL. HDIL is a company that has defrauded funds to the tune of Rs 2,700 crore by taking a loan of Rs 6,700 crore from BMC Co-operative Bank. As a result, the bank went bankrupt.

According to the contract with the Maharashtra Housing Authority, GAC has not completed construction of 672 houses. Instead it sold the land of Patra Sal to 9 companies for Rs 901.79 crore. Also, it started a construction project named ‘Miados’ and collected Rs.138 crore. Thus, GAC made a total profit of Rs.1,039.79 crore.

10 percent commission Subsequently, Praveen Raut, the former founder of GAC, was given Rs.100 crore from the HDIL account. He distributed this money among his family members and friends.

Apart from this, in Kim Beach, Alibah area, 8 houses have been bought in the name of Sanjay Rawat’s wife Varsha, wife of his close friend Sujith Bhatkar. The total value of these assets is Rs.11.8 crores.

Investigation and Arrest: In this regard, the Enforcement Department interrogated Sanjay Raut for 10 hours on July 1 and recorded his statements. The enforcement department asked him to appear again for questioning on the 20th of last month. He did not attend the Monsoon Session of Parliament. As a result, a fresh summons was sent to appear on 27th of last month. Even then, he did not appear citing the same reason.

As a result, the enforcement department conducted a surprise search at Sanjay’s house in Bandra suburb of Mumbai at 7 am yesterday. Important documents are said to have been seized.

After that, the officers who took Sanjay Rawat to the Enforcement Department office yesterday evening continued to interrogate him. Based on the investigation, he was arrested around midnight.