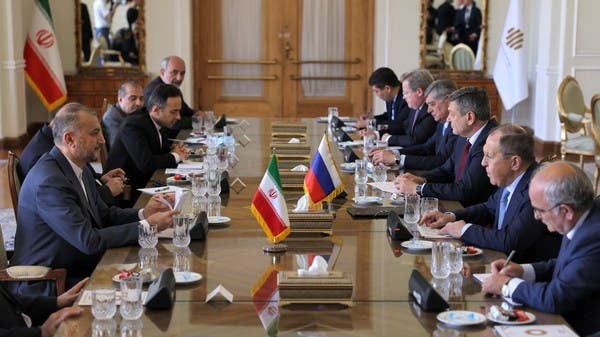 In light of the continuous escalation between his country and the United States, as a result of the Russian military operation that began four months ago on Ukrainian soil, Russian Foreign Minister Sergey Lavrov accused Washington of trying to change international laws and United Nations charters.

He said in a joint press conference with his Iranian counterpart, Hossein Amir Abdollahian, from Tehran that the West tried to create a state hostile to his country on the western borders, in reference to Ukraine.

With regard to the Iranian nuclear agreement, he expressed his hope for the resumption of the Vienna talks in the coming period, pointing to the existence of measures in this regard, and said that his country seeks to restore the nuclear deal in its original form.

For his part, Iranian Foreign Minister Hossein Amir Abdollahian blamed America for the stalled talks that began more than a year ago, and called for the lifting of all US sanctions in order to revive the nuclear deal.

‘Aggressive policies of the West’

Before meeting his Iranian counterpart, the Russian Foreign Minister, who arrived in Tehran yesterday, had confirmed that his country was adapting to what he described as the aggressive policies of the West.

In a clip published by the Russian Foreign Ministry, Lavrov considered that “in all countries that suffer from the negative impact of the selfish approach of the United States and the countries in its orbit, there is an objective need to reconfigure their economic relations so that they can avoid dependence on the whims and vagaries of Westerners,” referring to It may mean his country’s alliance with Tehran and Beijing.

Moscow announced last month that it had discussed with Tehran, which is in turn subject to Western sanctions and has some of the largest oil and gas reserves in the world, the exchange of oil and gas supplies as well as the establishment of a logistics center, according to Reuters.

While Russia is defying the harsh Western sanctions that were imposed on it as a result of the launch of its military operation on Ukrainian soil on February 24, Tehran, in turn, is making strenuous efforts to preserve the country’s faltering economy in light of the US sanctions that were re-imposed after Washington withdrew from the nuclear agreement in 2018.

While observers see that the possibility of weaving a Russian-Iranian-Chinese alliance is also possible, albeit difficult, in light of the Western sanctions imposed on the Russians and those who deal with them, after the West lined up strongly against Moscow, imposing painful sanctions on it that included various sectors from gas to oil, banks and commercial companies. He also imposed sanctions on hundreds of Russian politicians, businessmen and wealthy people.

Meanwhile, Kyiv has been strongly supported with weapons, equipment and humanity, since the outbreak of the conflict between the two countries.