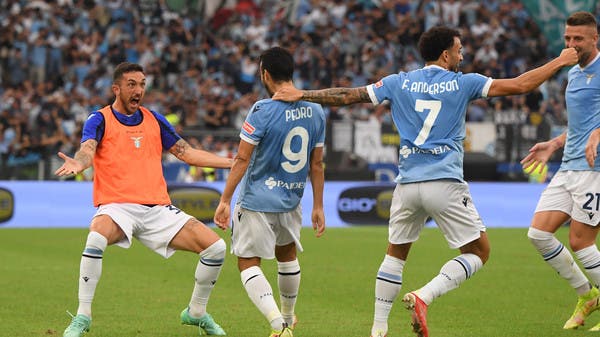 Lazio settled the derby of the Italian capital in his favour, after achieving a thrilling 3-2 victory over its guest and arch-rival Roma today, Sunday, in the top of the sixth stage matches of the Italian Football League.

Lazio, who scored only two points in their past three matches in the tournament, rose to 11 points in sixth place, one point behind Rome, fourth, who suffered their second loss in the competition this season.

Lazio scored early through Serbian Sergei Milinkovic-Savic in the tenth minute, before the veteran Spaniard Pedro Rodriguez added the second goal in the 19th minute.

Young Brazilian Roger Ibanez reduced the difference by scoring the first goal for Roma in the 41st minute, but his compatriot Felipe Anderson added the third goal for Lazio in the 63rd minute.

And the match re-ignited again, after the French Jordan Vertuo scored the second goal for Roma in the 69th minute from a penalty kick, so that the Portuguese coach Jose Mourinho’s team tried to equalize during the remaining time of the meeting, but to no avail.

This became Lazio’s second victory in the capital’s derby during its last three matches with Roma in the league.

Previous articleGovernment of Sudan: There is no battle between the military and civilians
Next articleBangalore beat Mumbai in IPL 2021 .. Herschelle Patel hat trick wickets