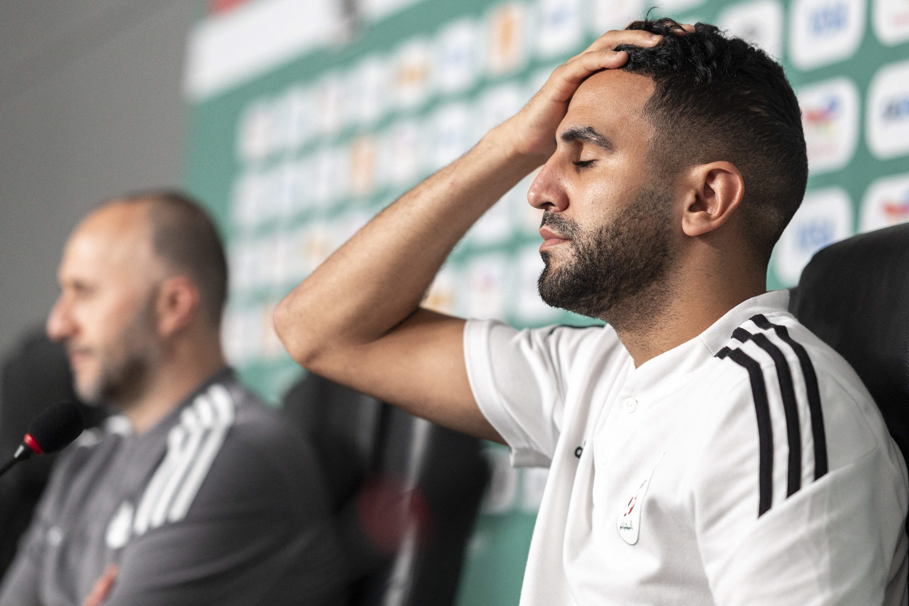 The Algerian national team, the defending champion, realizes that it has no choice but to win against the strong and leading Ivory Coast at the end of the group stage tomorrow, if it wants to complete its journey in the African Nations Cup in Cameroon, while the task does not seem easier for Tunisia, which is deficient due to the Corona virus against The Gambia.
The biggest pessimists of the Algerian national team did not expect the “Desert Warriors” to start their title defense campaign in this way, after they were satisfied with an orphan point from the first two matches in Group E, after an opening negative draw against Sierra Leone and a surprising and resounding loss against humble Equatorial Guinea that ended an impressive series of 35 matches. Unbeaten Algeria had started in October 2018.
Algeria is bottom of the group with one point, behind third Sierra Leone (2), second Equatorial Guinea (3) and leaders Ivory Coast (4). At Jaboma Stadium in Douala, coach Djamel Belmadi’s men will be required to beat the Ivory Coast and its strong attack led by Sebastian Haller, the Dutch star of Ajax Amsterdam and the top scorer of the group stage of the Champions League this season, and Wilfried Zaha and Nicholas Pepes, Crystal Palace and Arsenal players, respectively.
Algeria, the Arab Cup champion at the end of last year, paid in the first two matches the price of missed opportunities, especially in the opening draw against Sierra Leone, and it will hope that the attacking line led by its captain, Riyad Mahrez, Manchester City player, Youssef Blaili, Baghdad Bounedjah, Yassin Ibrahimi and others will rise to the level of aspirations To overcome the obstacle of the African champion twice (1992 and 2015).

“We will fight”
In the event that Algeria wins against the victory of either Sierra Leone or Equatorial Guinea in the meeting that will bring them together in Limbe, it will qualify directly with the winner of that match to the final price at the expense of Ivory Coast, to beat the latter in the direct confrontation between them, knowing that both of them will end the group with four points.
But if Algeria, the 1990 and 2019 champions, wins against a draw in the other match, it will draw with the Ivory Coast and Equatorial Guinea with four points each, and the goal difference rule will be invoked. This place in the six groups and qualify for the playoffs.
“We are in a state of failure, these are difficult moments,” Belmadi said after the loss to Equatorial Guinea. “The logical things don’t always happen in football, but for sure we will fight to survive in this competition.”
“It will be against the wonderful Ivory Coast team, which is made up of players who play in the biggest tournaments,” he added.

Tunisia without Khazri and Maaloul
After falling openly against Mali in a match that witnessed an arbitration scandal when the referee ended the match before the end of the ninety minutes, Tunisia revived its hopes of reaching the playoffs with a crushing 4-0 victory over Mauritania in the second round of Group F.
However, Tunisia suffered a strong blow before the fateful match in Limbe on Thursday, with seven players infected with the Corona virus, including captain Wahbi Khazri, the double against Mauritania and full-back Ali Maaloul.
The “Carthage Eagles” team occupies third place in the group with three points, behind each of the leaders Gambia and Mali, the second, who have four points, while Mauritania is bottom without a balance outside the accounts.
Therefore, Tunisia will be required to beat Gambia if it is to guarantee direct qualification regardless of what happens in the other match.
In the event that Tunisia, the 2004 champion, draws on its soil, in exchange for an unexpected loss for Mali against Mauritania, the “Carthage Eagles” and Mali will draw points, and the preference will be in favor of the latter to take second place in conjunction with the inaugural victory over the Arab team.
On Tuesday, the Tunisian Football Association announced on its Facebook page that seven players were infected with the Corona virus, after six of them missed the last match.
The statement stated that “the tests revealed that Ali Maaloul, Ayman Dahman, Ghaylan Al-Shaalali, Muhammad Ali bin Ramadan, Wahbi Al-Khazri, Ali Al-Jamal and Muhammad Amin bin Hamida were infected with the Corona virus, and they were isolated from the group.”
On the other hand, he announced, “Muhammad Dragher recovered, while the five players who were infected with the Corona virus for some time are subject to health briefing and rapid analyzes periodically, hoping that their analyzes will be negative before meeting Gambia, given that these players do not have any symptoms,” referring to Naim Al-Saliti, Johan and Tozgar, Osama El Haddadi, Dylan Brun and Issam Jebali who missed the Mauritania match.